On Wednesday’s PBS NewsHour, viewers received a bucket of happy talk about medication abortions from Dr. Jennifer Villavicencio. Twice, she insisted the use of mifepristone was “extraordinarily safe” — but it’s not safe for the unborn baby, who is expelled from the mother and killed.

PBS emphasized support for the Food and Drug Administration trying to “expand abortion access” after the Supreme Court’s Dobbs decision reversed Roe v. Wade and returned the abortion issue back to the states..

At least PBS presented statements from both sides of the debate — from NARAL Pro-Choice America, and from the Susan B. Anthony List, who said the FDA was helping “abortion activists turn every post office and pharmacy into an abortion business.”

PBS correspondent John Yang introduced Villavicencio this way: “She heads equity transformation for the American College of Obstetricians and Gynecologists.” There’s no “equity” in an abortion. Yang blandly asked “what is the significance of these new FDA rules?”

VILLAVICENCIO: These FDA rules are a response to the enormous amount of evidence that we have that mifepristone and medication abortion are extraordinarily safe and that these restrictions, these REMS, rules, are not necessary to keep people safe, and only create barriers to accessing essential health care like abortion.

She returned to that creepy talking point when Yang asked “What do you say to the critics who say this is making abortion, making terminating pregnancies too easy?” Abortion foes aren’t very bright, she suggested. They can’t understand complex issues.

VILLAVICENCIO: I actually used to be an anti-abortion activist. And so I understand that abortion can be really hard for individuals to understand. As someone, as a physician, an expert in science and in medicine who takes care of patients every day and who provides abortion care now, I understand that, while this is a complex issue, it’s a decision that should be made in between a doctor and the person seeking the abortion.

Medication abortion and mifepristone are extraordinarily safe. They’re just as safe as ibuprofen, the Advil that you get out of your cabinet or off the shelf in the local pharmacy. It’s just as safe as those things. And so needed essential health care can never be too easy to access.

PBS picked an expert that they presented as an objective media source, but it’s easy to dig up that she’s a hardcore abortion advocate. Planned Parenthood is a fan!

Dr. Villavicencio also tops her Twitter page with a “Pinned Tweet” celebrating how she introduced Joe Biden at an in October and how everyone should vote pro-abort in the midterms: 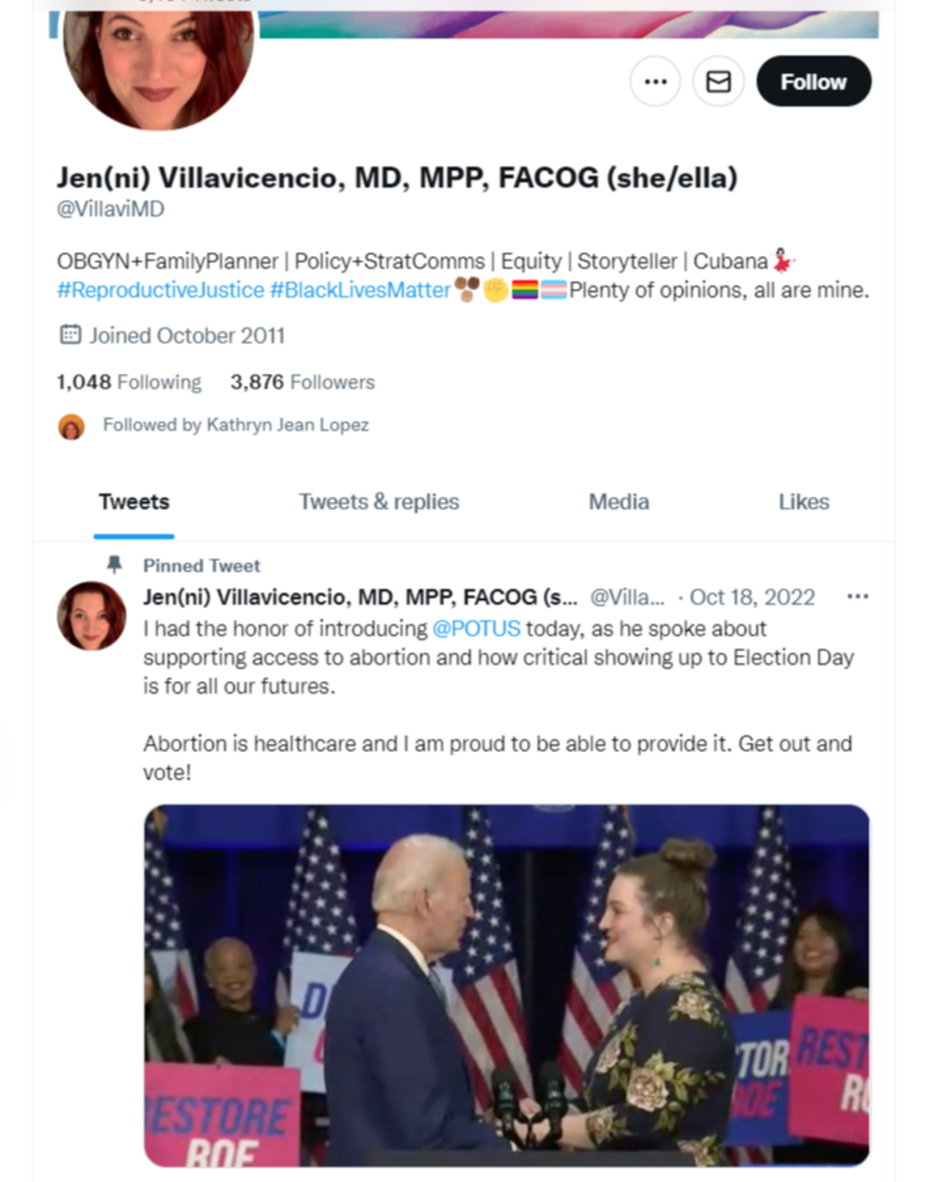 PBS NewsHour is brought to you in part by pro-abortion foundations, including the Bill and Melinda Gates Foundation and the Robert Wood Johnson Foundation.