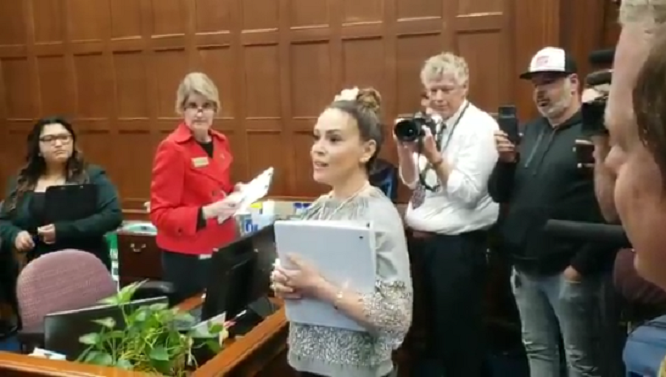 Actress Alyssa Milano has certainly worn out her welcome with pro-life Americans. Her relentless promotion of abortion and her attempt to get Hollywood to insert itself into the debate over abortion in Georgia has become annoyingly grating.

On Tuesday, the actress went to the Georgia legislature in an attempt to beat down lawmakers with a petition signed by members of the Hollywood elite. She’s hoping the petition would get the governor of Georgia to veto a bill that would ban abortions after an unborn baby’s heartbeat begins — because they are threatening to pull millions of dollars in television and movie production from the state.

But when Milano was confronted by a state legislator, the pro-life lawmaker stopped her in her tracks with one question.

Republican state Rep Dominic LaRicciaa responded to Milano: “What district of Georgia do you vote in?” Here’s how the rest of the exchange went:

“I work in Georgia,” Milano replied.

“Do you vote in Georgia?” LaRiccia asked.

“But you don’t vote in Georgia?” he asked again.

“Excuse me. Don’t interrupt me,” the actress fired back, completing her thought: “That I was going to escort in, that they wouldn’t let me escort in.”

“So that’s a no, you don’t vote in Georgia?” LaRiccia replied.

“No, but the people that work on my crews, the 90,000 people that the entertainment industry actually employs do,” she said.

After asking for his name, Milano eventually turned to the crowd that was watching the whole exchange and said, “These are the men that are voting on what is going on inside my uterus. This guy right here. This guy.”

The good news is Georgia Gov. Brian Kemp doesn’t care about Milano’s grandstanding in a state where she has no vote. He plans to sign the abortion ban anyway.

“I can’t govern because I’m worried about what someone in Hollywood thinks about me,” Kemp told the newspaper. “I ran the last two years on these issues, and I got elected with the largest number of votes in the history of the state of Georgia, and I’m doing what I told people I would do.”