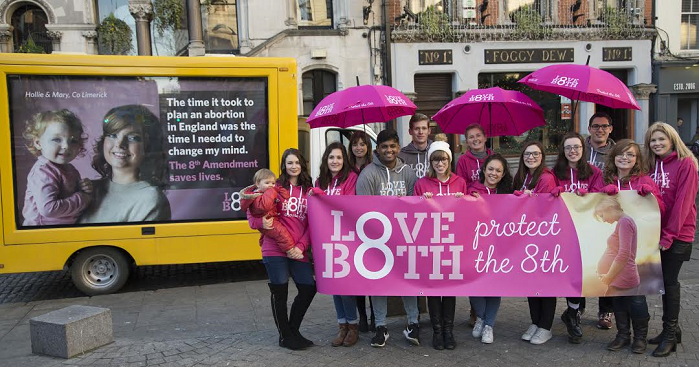 Two opinion polls published over the weekend are showing a drop in support for the Irish Government’s plans to introduce abortion on wide ranging grounds.

48% of respondents to a poll in the Sunday Independent support allowing unrestricted abortion up to 12 weeks, with 33% saying it goes too far and a further 19%  undecided.  A Sunday Times poll shows a broadly similar result; 43% of respondents support the Government’s proposal with 35% opposed to abortion up to three months and a further 22% undecided.

The SaveThe8 campaign said that the polls indicate that “a rebellion is taking hold amongst the electorate”.

Spokesperson Niamh UiBhriain said: “All opinion polls should be taken with a grain of salt, but we note that two weeks ago, before Savethe8th launched its national billboard campaign and ramped up its volunteer teams to over 1,000 people, an opinion poll showed this same proposal at 51% yes, 27% no. These new figures represent a notional 16% swing towards opposition in a two-week period. This tallies with the experience of our campaign, which has been that the more people find out about the government’s extreme proposal, the more they reject it.”

Lessening support on all fronts

Although the Independent poll found that a majority of people support abortion in scenarios such as “fatal foetal abnormalities”, rape, incest or a mother’s health, support has declined across all categories. For instance, support for “abortion where there is a threat to the long term health of the mother” has fallen by 6 points.

The results seem to be causing concern among advocates of repeal, with one political analyst predicting their side will lose, based on trends from the marriage referendum.

Another set of disastrous poll numbers for the #8thref campaign. I’ve updated my poll model. It shows #repealthe8th support declining much faster than during #marref. pic.twitter.com/rGIOF1GtN5

Meanwhile, a Government minister caused anger after saying that as things stand, the referendum won’t pass.

Truth is getting out

Pat Buckley, SPUC’s representative in Ireland, welcomed the drop in the previously reported support for abortion. “The entire process set up by the Irish Government was designed to marginalise the pro-life voice and consequently resulted in previous opinion polls being based of one sided information,” he explains. “Now that pro-life individuals and organisations have commenced their information campaigns the real facts are beginning to emerge. There is no such thing as limited abortion and repeal of the Eighth Amendment would have the effect of stripping unborn babies of all meaningful protections, leading to abortion on demand.

“I am convinced that a majority of Irish people, once the facts are explained, will continue to support retention of the current equal protection of the lives of mothers and their unborn babies.”