Two women were transported from a Alabama abortion clinic yesterday after paramedics had to hand-lift a partially clad woman from a narrow doorway and down several steps to an awaiting gurney.

A second woman was wheeled to her gurney in a wheelchair. The incident took place at the New Women All Women abortion clinic in South Birmingham.

This occurred on the day before the 39th memorial of the Roe v. Wade Supreme Court decision decriminalized abortion in America. That decision promised that women would be insured “safe, legal abortions.” 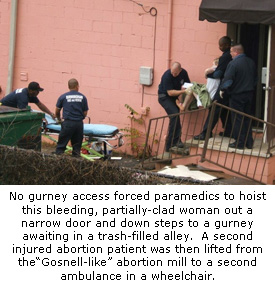 It was a promise that was never kept.

According to several witnesses, an ambulance first arrived at 9:31 a.m. but left shortly after without removing any patients from the clinic. At 10:21 a.m., less than an hour after the first ambulance, two more ambulances and another emergency vehicle returned to the abortion clinic. Witnesses said one of the women brought out by the EMTs appeared to be unconscious and bleeding. She was placed in an ambulance and transferred to a medical facility. A second woman emerged with an oxygen mask and was transported to the ambulance in a wheelchair. It is presumed that she was also taken to a nearby medical facility.

Pro-Life blogger Jill Stanek soon posted dramatic photos taken at the scene that showed that EMT with gurneys were forced to navigate through an alley filled with trash and debris to reach a door that prevented gurney access. The condition of the two women is currently unknown.

Fr. Gensemer’s full press statement along with six photos taken of the incident can be viewed at AbortionDocs.org.

“Abortionists love to complain about clinic regulations and portray them as an anti-abortion plot to prevent women from accessing, safe, legal care. This incident proves yet again how untrue those statements really are, and how much regulation is needed to close unsafe mills like New Woman All Woman. This place is no safer for women that Kermit Gosnell’s ‘shop of horror,’” said Troy Newman, President of Operation Rescue and Pro-Life Nation, who launched the website AbortionDocs.org last week.

“AbortionDocs.org was created for incidents like this, so the public would have comprehensive, up-to-date information about the abortion cartel and its abuses so that the whole truth about the horrific nature of their grisly business can be exposed and stopped through peaceful, legal means.”

Last year, Pennsylvania abortionist Kermit Gosnell was charged with the murder of Karnamaya Mongar, who died after paramedics found emergency exits blocked at his Philadelphia abortion mill. Lack of gurney access contributed to her death. Since then, several states have passed clinic regulations and increased inspections at abortion clinics. This has led to the closure of two abortion clinics in Illinois, two in Deleware, three in Pennsylvania, and more.

Pro-Life Nation is working with Fr. Gensemer to make sure that complaints against New Woman All Women are filed with the appropriate Alabama regulatory agencies.