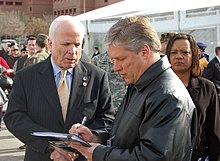 Washington, DC (LifeNews.com) — Republican presidential candidate John McCain announced a new Catholic leadership team on Thursday that features several pro-life lawmakers and advocates. The team is McCain’s latest effort to try to develop more support among the pro-life community since his campaign has experienced a recent upswing in the polls.

McCain starts off the team with the backing of two political leaders who have been behind him for months — pro-life Sen. Sam Brownback of Kansas, a former president candidate himself, and former Gov. Frank Keating of Oklahoma.

"As Catholics, we are proud to announce our support for John McCain, a genuine American hero with a conservative record who has what it takes to lead this country," Brownback said in a statement the McCain campaign sent to LifeNews.com.

Keating, who recently introduced the Arizona senator to a national conference call of Catholic pro-life advocates, said McCain "can uniquely appeal to Catholics with his strong, 24-year pro-life record."

"These are exactly the type of qualities that Catholic voters will be looking for in 2008," he added.

Reps. Lincoln Diaz-Balart and Mario Diaz-Balart of Florida, Ray LaHood of Illinois and Dan Lungren of California are also included.

"I am very pleased to have the support of this distinguished coalition of Catholic leaders," McCain told LifeNews.com in the statement.

I am proud to stand side-by-side with Catholics on many of the most critical issues of our day (such as) defending the sanctity of human life," he added. "I look forward to working with these Catholic leaders in the weeks and months ahead as we take our shared values to the White House."

McCain has a longstanding pro-life voting record on abortion issues but he has upset pro-life advocates with repeated votes to force taxpayers to fund embryonic stem cell research.