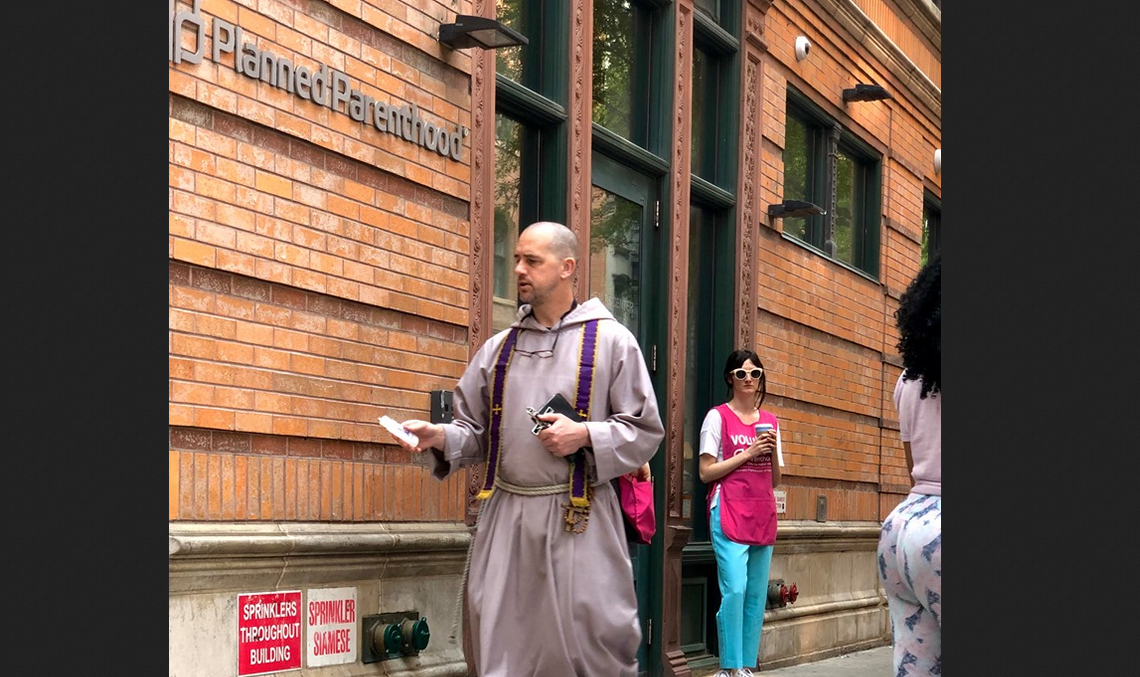 For trying to save unborn babies at a Planned Parenthood abortion facility, a Catholic priest could spend six months in jail.

Father Fidelis Moscinski was found guilty of a federal FACE violation for an alleged “lock and block” rescue at a Planned Parenthood abortion facility in Hempstead, NY on July 7, 2022. According to court testimony, during the one-man rescue action Father Fidelis placed multiple locks on the gate leading into the only entrance of the Planned Parenthood facility. Once the locks were cut off by the local fire department, Father Fidelis physically lay in the driveway obstructing cars before being taken into custody by local police.

An interview Father Fidelis recorded for EWTN’s show Pro-Life Weekly was played in court as evidence of his intent to block access, however the defense argued the interview proved his intent was to help parents considering abortion not to disrupt staff or services.

The defense argued that, because the rescue resulted in only a 10 minute traffic obstruction, it should be treated as a local misdemeanor and should not be prosecution, noting that there were no complaints from patients entering Planned Parenthood that day.

Jennifer Bono, Director of health center operations at the Planned Parenthood in question located at 540 Fulton Avenue contradicted herself when she said there were complaints, when earlier she had told the FBI there were none.

Defense attorneys also argued that the government was discriminating against Father Fidelis based on his viewpoint — which the judge ignored.

Father Fidelis is facing a maximum penalty of 6 months in federal prison and will be sentenced on April 24th.

Terrisa Bukovinac, founder and executive director of PAAU, a pro-life group for liberals, told LifeNews,  “It is outrageous that the FACE Act is still being employed to target pro-life activism in a post Roe vs. Wade America. There is no federal right to an abortion! Father Fidelis is a hero for putting his body in between the babies and their killer and we encourage others to do the same.”

This is not the first time father Moscinski has faced jail time for saving babie from aboriton.

Moscinski, of the Bronx, and two other pro-life advocates were sentenced to 90 days in jail last year and fined $500 for entering an abortion facility and refusing to leave.

“Isaiah said woe to those who call good evil and evil good. Woe to those who call abortion a right,” Moscinski said in the courtroom, according to the Red Rose Rescue. Addressing the judge, he continued, “You disallowed the justification defense and that injustice was compounded by the jury and also by the sentencing you have given, I plead the blood of Jesus on this court room.”

On Nov. 27, Moscinski, Will Goodman and Matthew Connolly participated in a Red Rose Rescue at All Women’s Medical, an abortion facility in White Plains, New York.

According to the newspaper, the three pro-life advocates entered the abortion facility waiting room and one blocked the door to prevent patients from entering. They refused to leave for two hours, and police eventually “physically carried” them outside, Westchester County District Attorney Mimi Rocah said.

Monica Migliorino Miller, director of Citizens for a Pro-Life Society and a Red Rose Rescue participant, explained that their desire is to help mothers and babies in need.

“The Red Rose Rescue is an act of charity for women who feel, for whatever reason, they must have their innocent unborn children killed,” Miller said, previously. “Those who take part are willing to embrace risks for these women and their babies. We will go into the very places where the unborn are put to death and extend help to the moms. Should this help be refused—we will not leave the abortion centers but remain in solidarity with the helpless victims oppressed by the injustice of abortion.”