A little girl named Penelope is being described as a “miracle” for more than one reason.

About a year ago, while she was still in the womb, doctors diagnosed the baby girl with a rare defect and gave her a 25-percent chance of survival, The Vancouver Sun reports. Now, Penelope is eight months old and expected to thrive.

Her mother, Chelsea Belleau, 38, of Richmond, Canada, said Penelope is a “miracle.”

“If you see her now, you would never know what she’s been through,” she said. “She’s just a happy, really chill baby.”

Speaking with The Sun, she expressed the gratitude that she and her husband, Benjamin Nickel, feel to have their daughter. Belleau said they spent six years trying to have a baby before they conceived.

The pregnancy brought them great joy – until their 19-week check-up. Belleau said doctors discovered a hole in Penelope’s diaphragm, a condition known as congenital diaphragmatic hernia, according to the report.

Dr. Erik Skarsgard, the chief of surgery at B.C. Children’s Hospital, said the condition caused underdevelopment in Penelope’s lungs, and her chances of survival were only about 25 percent.

He told the newspaper that he recommended Penelope undergo a risky but potentially life-saving treatment while she was still in the womb.

“They deploy a tiny, two to three millimeter balloon into the fetus’ windpipe which causes the lungs to grow faster than they would otherwise,” Skarsgard explained. “It helps make up for the fact that they are so underdeveloped by the time these babies are born, so they have a chance.”

Her parents agreed, and doctors performed the procedure at 29 weeks of pregnancy, according to the report.

A few months later, when she was born, the baby girl required intensive care: First, doctors put her on a tiny ventilator and then performed surgery to fix the hole when she was four days old, the report continues.

Her parents said they are so grateful to the hospital team for saving her daughter’s life. Although she still uses a feeding tube and breathing assistance when she sleeps, they said she is expected to lead a normal, healthy life someday.

“During the day she just plays and enjoys being a baby. She loves bright lights and sounds. I sing to her a lot,” Belleau told The Sun. “… I can’t wait to see her continue to thrive.” 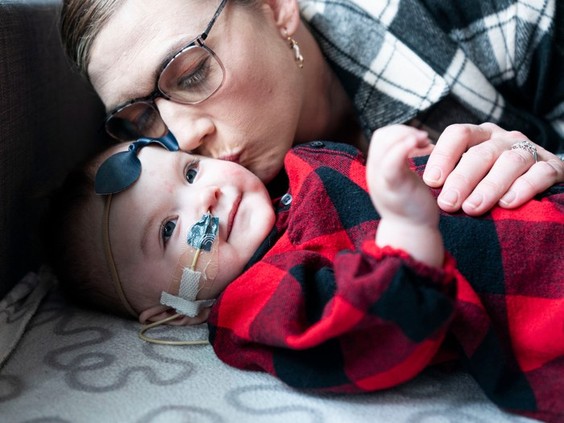