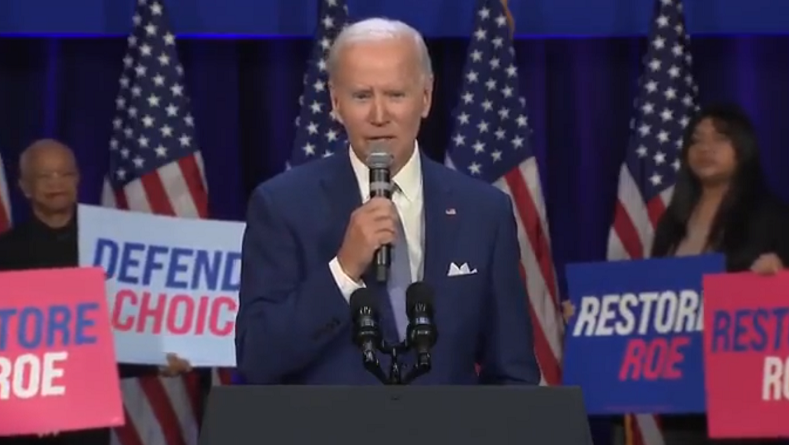 Joe Biden is meeting with state legislators today to encourage them to pass more state laws promoting abortions up to birth.

The White House is playing host to roughly 50 Democrat state lawmakers from 31 states this weeks state legislatures across the country prepare for their new legislative sessions in January. Biden also wants pro-abortion legislators to try to pass laws watering down or repealing abortion bans in red states.

The aim is to give state lawmakers a to-do list for the upcoming legislative session, though meeting those goals will be nearly impossible in states where Republicans are in control. The meetings come as Democrats are increasingly focused on making inroads in state governments in part through better alignment on top issues, a political tactic that helped the GOP secure leadership in 23 states.

“This is not going away anytime soon,” said Jen Klein of the Biden administration’s Gender Policy Council. “Tens of millions of Americans are living under bans of various sorts, many of them quite extreme, and even in states where abortion is legal, we’re all seeing the impact on providers and on systems being loaded by people who are coming across state lines.”

The administration, meanwhile, is implementing Biden’s executive orders signed in July and August that directed federal agencies to push back on abortion restrictions and protect women traveling out of their state to seek one, though some women’s rights advocates say it doesn’t go far enough.

And there are still other avenues left for the administration to explore, said Kathleen Sebelius, a former U.S. health and human services secretary.

HHS might look to wield its power around federal protections for health care providers, life-saving abortions, abortion pills and travel for women in abortion-restricted states, she said. During her tenure, for example, the agency did some policy maneuvering to expand rights for same-sex couples, including a requirement that any hospitals receiving federal funds allow their patients to select a same-sex partner as a visitor, years before gay marriage was legalized.

“It’s amazing how broad a lot of the agency’s authorities are and how much creative thinking can go on,” Sebelius said.

Following the Supreme Court decision to overturn Roe v. Wade some 14 states have banned abortions and are either protecting unborn babies from the moment of conception or have heartbeat laws protecting babies when their heartbeat can be detected at 6 weeks. Some states have done both.

Oklahoma:  Before Roe was overturned, Oklahoma had the distinction of becoming the first in the nation to successfully ban abortions from conception when Governor Kevin Stitt signed its Texas-style abortion ban. But, with the Supreme Court reversing Roe, the state’s trigger ban has gone into effect — which successfully bans abortions without having to rely on a private enforcement mechanism.

The state of Arizona, Indiana, Iowa, Ohio, South Carolina, North Dakota, Utah and Wyoming are all fighting in court to protect their abortion bans so babies can be saved.

Iowa appears likely to keep its abortion ban in place thanks to a change in the makeup of the state Supreme Court and reversing a decision falsely claiming the state constitution allows a right to abortion. South Carolina’s heartbeat bill will likely be upheld bu its conservative Supreme Court — and the same is expected in the rest of the states.

Michigan is the least likely of the bunch to see its pre-Roe abortion ban saved and its governor Gretchen Whitmer is aggressively fighting to kill it.

Ultimately, if all of these abortion bans are upheld, 22 states will protect babies from abortions.

Several other states have the potential to pass abortion bans protecting babies.

Nebraska is the second most likely state to ban abortions. Governor Pete Ricketts wants an abortion ban but the unicameral legislature is one vote short of having the two-thirds necessary to overcome a Democrat filibuster. Pro-life voters need to work hard to elect more pro-life members so the state can protect babies.

Florida, Nebraska and North Carolina — the most likely three — could make it so half the country protects babies from abortions.

If every one of the states in each of these three categories can ban abortions, then 31 total states — over three-fifths of America — would protect babies from abortions. It’s virtually impossible to see any of the other 20 states banning abortions any time in the near future because they are run by pro-abortion Democrats and have been for a long time.