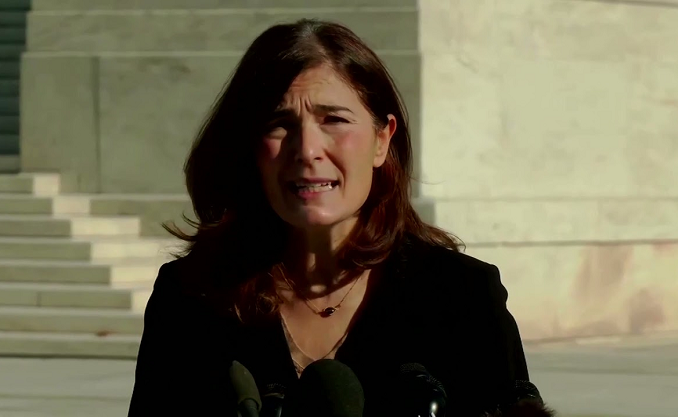 Senate Judiciary Republicans voted today to block the nomination of Julie Rikelman, the radical pro-abortion attorney who argued against Dobbs.

Biden appointed the pro-abortion lawyer to a position on the 1st Circuit Court of Appeals but the Senate committee deadlocked on her nomination today, with it ended in a tie vote because every Republican on the panel voted against her.

At her September confirmation hearing, Rikelman said she would “apply Dobbs faithfully” when asked about the Dobbs case that overturned Roe v. Wade. But Republicans doubted her sincerity and voted against her nomination today.

Rikelman represented the Mississippi abortion facility at the center of the Dobbs case as a lawyer with the Center for Reproductive Rights. In a historic June ruling, the Supreme Court overturned Roe v. Wade through Dobbs  and allowed states to begin protecting unborn babies from abortion again.

During a hearing before the U.S. Senate Judiciary Committee, Rikelman said she will follow the ruling even though she personally disagrees with it, Reuters reports. If confirmed, she would become a judge on the First Circuit Court of Appeals.

However, several Republican senators questioned her statement, pointing to her long record of abortion advocacy and public criticism of the June ruling.

“You have spent the majority of your professional life as an extreme zealot advocating for abortion,” U.S. Sen. Ted Cruz, R-Texas, told her, according to the report. “That is clearly a heartfelt and personal passion of yours.”

U.S. Sen. Mike Lee, R-Utah, also questioned Rikelman about her pro-abortion beliefs, pointing to a recent statement she made about the Dobbs ruling creating the “biggest public health crisis that we have seen in decades.”

“In a world in which more babies are being born and being born alive than being aborted, you call that a public health crisis?” Lee said.

Rikelman said she would put aside her personal views and do her duty as a federal judge to follow Supreme Court precedent, including the recent abortion ruling.