As we reach the midpoint of this fall’s 40 Days for Life campaign, 102 babies have been spared from abortion thanks to YOUR prayers!

When a young woman in Sacramento arrived at Planned Parenthood for her abortion appointment, sidewalk counselors offered her information on life-affirming choices. She took the information–but proceeded into Planned Parenthood anyway. A short time later, a young man, who vigil participants said appeared to be “on a mission,” rushed into the abortion facility.

Suddenly, both the woman and the man emerged from Planned Parenthood to sit and read through the pregnancy resource materials.

“You guys softened her heart,” the man announced to prayer warriors. “You guys changed her mind. We’re having a baby!!”

Campaign participants were filled with joy. “What an honor and blessing it was to be the first person to congratulate this smiling young man with a proud handshake,” recalled Wynette.

Days later, an older woman dropped off her daughter-in-law at Planned Parenthood–and then waited for her across the street.

Vigil participants showed her models of unborn babies, prompting the woman to say, “My daughter-in-law is inside…I sure hope she isn’t getting an abortion.”

That’s when the younger woman burst out of Planned Parenthood, hopped in the car, and reported that she decided to keep her baby!

That makes at least FOUR babies saved from abortion in Sacramento this campaign.

You don’t need a Ph.D. to save a baby. Just sign up for 40 Days for Life’s simple and effective video-based Sidewalk Outreach training course: 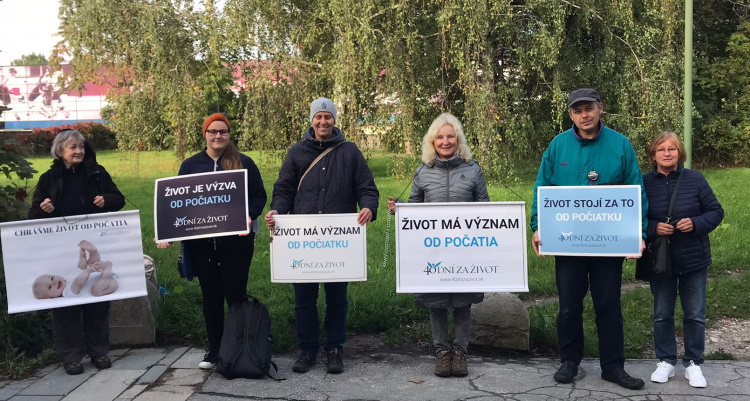 Vigil participants in Bratislava reported a baby saved from abortion.

“We took action quickly with prayers, fasting, and [offers of] financial support and support for her and her family,” reported the local team. “We were just told that today’s abortion was canceled. Thank you, Lord, for your mercy!”

A couple in Southern California found out they were expecting–when they already had a six-month-old girl. The thought of caring for a second child overwhelmed the new parents.

“After talking with [vigil participant] José, they were happy and strong about continuing with the pregnancy,” shared Hilda, the local campaign leader. “Praise be to God!”

Just a few days later, Hilda reported another life decision–with very similar circumstances–as a second couple with a six-month-old baby chose life in response to the presence of vigil participants on the sidewalk!