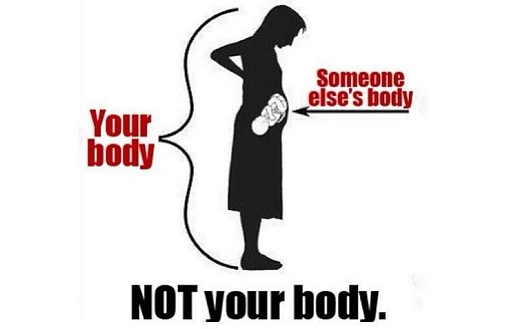 Recently, Monica Hesse, a columnist for the Washington Post, published an op-ed piece entitled, “The One Point Abortion Rights Activists Need to Keep Making”.[i] Frankly, it was a horrible argument that tried to modify the old pro-abortion philosophical argument of Judith Jarvis Thompson. The argument itself centers on bodily autonomy as an absolute right.

Dr. Thompson, in her infamous 1971, “A Defense of Abortion” piece tries to make this very argument positing not only an extreme hypothetical situation, but one that is just plain ridiculous. She imagines a situation in which a woman wakes up with a famous violinist surgically bounded with her because 1) he is ill and 2) she is able to keep him alive. Dr. Thompson’s argument falls quite short for several reasons, but most notably is the issue of the circumstances in which a pregnant mother finds herself in versus that of the woman who has found herself surgically united to the violinist. One consented to the act that created the child. The other woke up without any prior knowledge of what was going to happen to her.

However, Ms. Hesse attempts, to further Dr. Thompson’s argument in a unique way by admitting the analogy of the violinist was not particularly good, but she goes further by arguing that it is not compulsory to donate organs when there is someone in need. To some extent she is correct. There is no moral obligation to donate an organ to other strangers (here she likens a stranger to the new unborn child) in need, even if the other person will die without it. One is not obligated to go through an invasive surgical procedure, that has high risk complications itself, to save the life of a stranger even if the donor is a genetic match to the stranger. The fact is, that organ donation can be dangerous for the donor, so even if the person is a match, one is not compelled to donate since it could mean several different high-risk outcomes for the donor.

In fact, the issue that Ms. Hesse completely ignores is the issue of parental duties. An organ donor does not have the same duties to a stranger who needs a kidney or some other organ, because the duties to a stranger are different. Yet, parents do have moral duties as soon as they become parents. Looking at the sexual act, one must understand that when one engages in the sexual act, they not only consent to the scientific reality that life may come into existence because of this act, but as a result of this life coming into existence, they can become parents and have the moral obligation to take on the responsibilities of parents. This life comes into existence at conception, and it is at this precise moment when the man and woman become mom and dad. As such, moral responsibilities follow. Even before birth we place a high moral responsibility on mothers not to drink and to get the proper prenatal care. These are basic responsible parental actions. But Ms. Hesse seems to think that there is no real duty to the unborn child.

This poses a moral dilemma for her. Why? Because if there are no parental duties owed to the unborn child such as preserving the child’s right to life, then why are children owed parental duties after birth? There is a logical inconsistency here that is simply not addressed. Simply put, Ms. Hesse cannot explain why abortion is no different than a parent merely refusing to care (provide shelter, food, medicine, etc.) for their born child on the basis of her argument. To simply say it is a matter of bodily autonomy is not only insufficient, it is deadly.

Mainly, because bodily autonomy is not an absolute right. It certainly is not a fundamental right. A patient does not have the right to do whatever he or she wants within a hospital. If the doctors want you to be stationary to help with the healing process while one recuperates, then one simply does not have the right to get up and move about the hospital without permission first. We have just come out of a pandemic that highlighted the very fact that bodily autonomy is not absolute, for many masks were a requirement for many months. Prostitution is illegal in the vast majority states. You have to wear a seatbelt when you are in a car. Certain drugs are illegal to consume. In fact, in some cases it may be problematic, legally speaking, for those who are on parole to even drink alcohol if they were in an alcohol related crime. The list can go even further, but the point has been made; bodily autonomy is certainly not seen as an absolute right within the US legal system and with good reason. Ms. Hesse seems to have a vast misunderstanding of the human body itself. While organ donation falls into the category of extraordinary medical care, one is hard pressed to describe the vast majority of pregnancies as categorically extraordinary medical care. Why? Because the human female is equipped, bodily, to nurture the child within the womb. This is what normally happens. Pregnancy is not an illness.

Ms. Hesse does not seem to understand the very basis of rights and duties. This seems to be a common problem for those arguing for abortion. It should be evident even to those just learning about the Declaration of Independence that our country was founded upon the idea of Natural Rights; rights that even presuppose government itself. As was discussed in a previous article,[ii] rights derive from moral duties and there is no duty to directly kill innocent human life. Therefore, there is no right to abortion. Moral parental duties are specific: to care, protect, and preserve the lives of their children. This is why Ms. Hesse’s argument fails just as badly as her predecessor, Dr. Thompson. These duties just do not magically appear at birth. If so, then rights are merely arbitrary and not based upon the actual nature of the human being. Rights are inherent because of the nature of the human being as a rational and social creature. And since the human being has his/her human nature at the moment of conception, this human being has certain rights that must be respected immediately; duties that are owed to that unborn child. Specifically, his/her life must be respected, and his/her life must be nurtured precisely because this child came into being because of the sexual act of the mother and father.

Ms. Hesse, and her pro-abortion counterparts, need to realize that organ donation and pregnancy are simply not comparable with respect to moral duties and rights. Furthermore, they need to realize that there is no absolute fundamental right to bodily autonomy. It simply does not exist within the realm of morality. No parent has the right to simply throw their child out the door, into the elements, and then refuse to ever care for them again because they may see it as a drain on their personal or bodily autonomy. No mother has the right to destroy her unborn child because she thinks it will infringe upon her autonomy. As Justice Clarence Thomas stated in his concurring Dobbs opinion, “That 50 years have passed since Roe and abortion advocates still cannot coherently articulate the right (or rights) at stake proves the obvious: The right to abortion is ultimately a policy goal in desperate search of a constitutional justification.”[iii]

The reason why abortion cannot find a constitutional basis is for the mere fact that it is immoral to begin with; it is contrary to the moral duties of human beings. Since The US is founded upon the idea of Natural Rights and since it has been shown why abortion cannot be a right under any category, it is time for abortion rights intellectuals to simply admit defeat. There is simply no logic to their case.