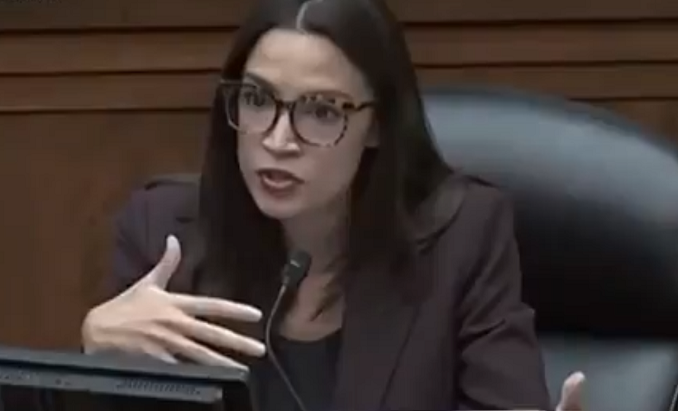 Rep. Alexandria Ocasio-Cortez made a bizarre claim on Thursday that abortion is an economic issue because birth makes parents “work against their will” if they don’t want to have a baby.

The odd comparison during a Congressional hearing of giving birth and forced labor came in response to a Republican lawmaker who said Democrats need to focus on America’s troubled economy instead of promoting abortion.

AOC has apparently never heard of birth control, contraception or abstinence, which any couple can use to prevent pregnancy.

The leftist from New York is a longtime abortion advocate.

In September she urged men to do more to support the killing of unborn babies in abortions in a new interview with GQ.

“For almost every woman that has gotten an abortion, there’s a man who has either been affected or liberated by that abortion, too,” she told the magazine. “In this moment, it’s really only going to be the vulnerability of men, and men talking to other men, that gives us the greatest hope of shifting things the fastest, soonest.”

Americans remain divided about abortion, but polls consistently show strong public support from both men and women for legal protections for unborn babies, especially after the first trimester or once their heart begins to beat.

Ocasio-Cortez, however, supports legislation that would force every state to legalize abortion on demand again and force taxpayers to pay for them. To achieve that goal, she wants more men to be vocally pro-abortion.

The congresswoman told GQ that she believes many men do not talk about abortion because they want to “center the person who’s most impacted.” She compared it to how she believes white people often hesitate to discuss racism.

“But we know that when white folks take up space and say the right thing in rooms of other white people, that is the most shifting activity that can happen — more sometimes than any protest or any person writing a letter to the editor or anything like that,” she said.

“And we need men to be speaking up in that way as well,” Ocasio-Cortez continued. “But I think men, sometimes they think, I’m not a woman. This doesn’t affect me the most.”

Her call comes after decades of abortion activists demanding silence from men. Pro-abortion feminists claimed abortion is a women’s issue and men have no say in it. However, their demands only ever have applied to pro-life men. Never did they criticize the male justices on the Supreme Court who decided Roe, and they ignore the problem of abusive men who coerce and force women and girls into aborting their unborn babies.

But Ocasio-Cortez is right about one thing: Abortion does affect men and women, although not the way she claims, and both deserve a voice in the matter. Every abortion destroys the life of a unique, irreplaceable living child with a father and a mother. And just like the mother, the father has a responsibility to protect his child. In some cases, men want their unborn children to be aborted so they do not have to be responsible. Other times, men desperately want to protect their child but are powerless to stop their partner from getting an abortion. Men and women both suffer anger, depression, grief and heartbreak for their aborted babies.

Ultimately, abortion is a human rights issue that affects everyone, and every man and woman must speak up about the right to life for babies in the womb.