Hundreds of pro-life advocates crowded into the Indiana Statehouse on Tuesday, dressed in blue as they urged state lawmakers to pass legal protections for unborn babies.

Indiana Right to Life organized the Love Them Both rally as lawmakers hold a special session to pass pro-life legislation in the wake of Roe v. Wade being overturned.

The rally brought pro-lifers of all ages and walks of life to the capitol to advocate for protections for unborn babies.

Most of the states bordering Indiana already have pro-life laws in place that ban or strictly limit abortions, and pro-life advocates hope Indiana will pass legislation this summer to join them. Currently, more than 8,000 unborn babies are aborted in the state annually, according to Indiana Right to Life.

Photos of the rally from pro-life advocates and local news outlets show hundreds of pro-lifers in blue T-shirts standing on all three floors of the statehouse. Many held signs that read, “Love Them Both,” “Stop the killing of the preborn” and “Protection at conception.”

This is the statehouse right now in #Indiana — a sea of “pro-life blue” — as the state holds a special session to consider its #abortion law and LIFE!

Without a #prolife law in place, IN is a Midwest “abortion destination.”

If in IN, please call your legislator!

Ahead of the rally, Indi ana Right to Life called for a state-wide day of prayer Sunday before the legislative session.

“What we are hoping to see is a movement of the heart, not a program or a protest,” said Mike Fichter, president and chief executive officer of the organization. “It’s a day to come together as one Hoosier family and affirm that every life has value, because everyone is created in the image of God.”

Fichter urged Indiana pro-lifers to show love and compassion to pregnant mothers and support them as they choose life for their babies.

Earlier this month, Gov. Eric Holcomb called a special legislative session to consider pro-life legislation after the U.S. Supreme Court overturned Roe in a historic ruling on June 24. In their ruling Dobbs v. Jackson Women’s Health, the justices returned the power to legislate abortion to the states. More than a dozen already have laws in place that protect unborn babies, although some are being challenged in court.

On Tuesday, the Indiana Senate Rules and Legislative Procedure Committee advanced a controversial pro-life bill after passing several amendments, including penalties for abortionists who break the law, The Indiana Lawyer reports. No pro-life organization supports state Senate Bill 1, as initially introduced, and it is not clear if the amendments Tuesday fix the problems.

One pro-life Republican on the committee, state Sen. Mark Messmer, R-Jasper, voted against the bill, citing concerns from pro-life organizations, according to Indiana Public Media. However, the bill passed and now is scheduled to be considered by the full state Senate.

Fichter’s organization and others have described the bill as “weak,” saying it does not have adequate protections for unborn babies.

In a statement last week, Indiana Right to Life explained: “This bill goes through the motions on paper, but lacks any teeth to actually reduce abortions in Indiana by holding those who perform abortions or would intentionally skirt the law accountable with criminal consequences. As the bill reads now, the 8,000-plus abortions that take place annually in Indiana would continue unabated in counties like Marion County where the prosecutor has already stated he will not enforce the law. That is unacceptable and pro-life Hoosiers will not silently let that stand.” 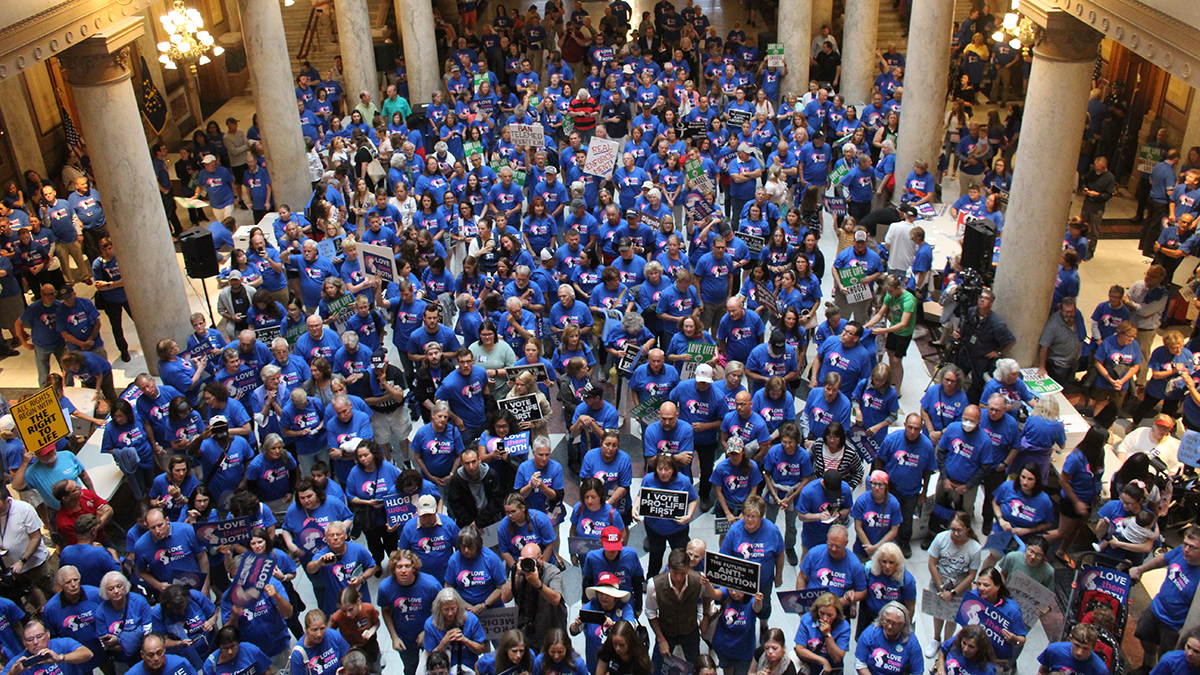