This story was “too good to check” for the liberal media — a ten-year-old rape victim in Ohio having to travel to Indiana to get an abortion. On Saturday, Washington Post fact-checker Glenn Kessler noticed it when Joe Biden used it. “This is the account of a one-source story that quickly went viral around the world — and into the talking points of the president.”

On Friday the president claimed:

“This isn’t some imagined horror. It is already happening. Just last week, it was reported that a 10-year-old girl was a rape victim — 10 years old — and she was forced to have to travel out of state to Indiana to seek to terminate the pregnancy and maybe save her life.”

On Friday, Biden was the latest to “pounce” on an Indiana abortionist’s claim that she saw a raped 10-year-old girl for an abortion. But the Indianapolis Star that reported this story is in full defensive crouch. The reporter isn’t talking.

The story was “too good to check.” pic.twitter.com/yUe7g4Bin8

But Biden was late to the game — last Sunday, CNN host Dana Bash repeatedly threw this alleged offense in the face of conservative Gov. Kristi Noem. CNN just assumed it was true, and an ambitious Republican politician is never going to suggest it’s sketchy.

The Indianapolis Star reported that abortionist Caitlan Barnard “received a call from ‘a child abuse doctor’ in Ohio who had a 10-year-old patient who was six weeks and three days pregnant.” The Star reported that the child “was on her way to Indiana to Bernard’s care.”

Kessler underlined “There is no indication that the newspaper made other attempts to confirm her account. The story’s lead reporter, Shari Rudavsky, did not respond to a query asking whether additional sourcing was obtained.” The Star put out a lame statement that “the facts and sources…are clear.” 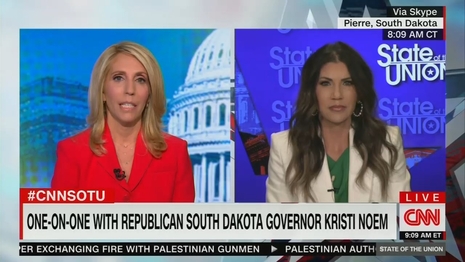 That’s not transparency! That doesn’t build confidence in newspapers! Kessler noted this one-source anecdote was treated as fact all over the globe, and he included CNN’s Dana Bash.

Kessler added that “Under Ohio law, a physician, as a mandated reporter under Ohio Revised Code 2151.421, would be required to report any case of known or suspected physical, sexual or emotional abuse or neglect of a child.”

But the abortionist wasn’t talking.

Bernard declined to identify to the Fact Checker her colleague or the city where the child was located. “Thank you for reaching out. I’m sorry, but I don’t have any information to share,” she said in an email.

Dan Tierney, press secretary for Ohio Gov. Mike DeWine (R), said the governor’s office was unaware of any specific case but he said under the state’s decentralized system, records would be held at a local level.

Kessler said he checked it out: “we contacted child services agencies in some of Ohio’s most populous cities, including Cleveland, Columbus, Cincinnati, Dayton and Toledo. None of the officials we reached were aware of such a case in their areas.” Did this actually happen?

This is a very difficult story to check. Bernard is on the record, but obtaining documents or other confirmation is all but impossible without details that would identify the locality where the rape occurred.

With news reports around the globe and now a presidential imprimatur, however, the story has acquired the status of a “fact” no matter its provenance. If a rapist is ever charged, the fact finally would have more solid grounding.

If Donald Trump picked up a story like this, Kessler would assign Pinocchios. As usual, there were no Pinocchios for Biden, and his take on the “presidential imprimatur” on this possibly mythical event is so mild that you could interpret it as “Oh, it’s a fact now.”