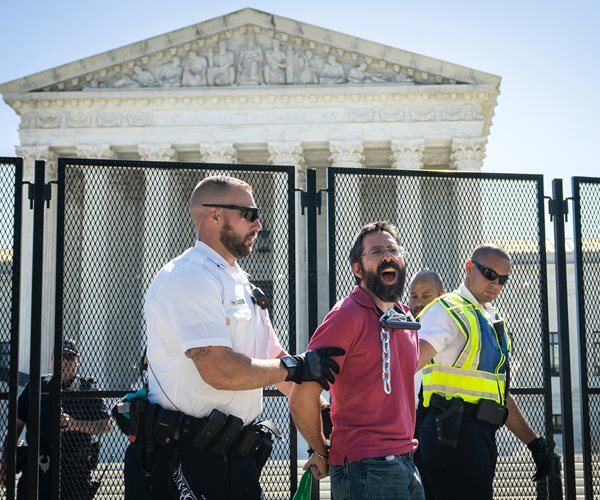 A pro-abortion activist chained himself to the security fence outside the Supreme Court to protest the upcoming decision in the Dobbs case that is expected to overturn Roe v. Wade.

Americans will have to wait another week for a potential Supreme Court decision to overturn Roe v. Wade and end an era of 63 million babies dying from abortion.

The nation’s highest court issued no decision today in the Dobbs case regarding a 15-week abortion ban in Mississippi, which means the next set of Supreme Court decisions from this term will be handed down next Monday. If Roe is reversed, as many as 26 states could protect babies from abortion.

But Guido Reichstadter picked today to chain himself to the fence outside the court, perhaps expected the decision to be handed down today.

The man, who secured a heavy-duty U-shaped bicycle lock around his neck, chanted “Overturn Roe? Hell no!” as a group of antiabortion protesters marched and shouted back at him, carrying signs with slogans including “Protection at Conception.”

The man remained secured to the fence for about 15 minutes until he was removed by authorities. He held up a green bandana with the address of an abortion rights group’s website. In a video on the group’s Twitter feed, the man identified himself as Guido Reichstadter of Miami and said he was there because Americans’ rights were coming under attack.

“I’m doing this as the first step, kind of like throwing down the gauntlet, the first step in a call to the people of America who support abortion rights – and that’s the vast majority of us – to step out of inaction and passivity and sitting back and to enter nonviolent resistance,” he said.

Ironically, abortion activists have spent years telling Americans that men have no right to comment on the issue of abortion because it’s supposedly a woman’s issue.

The nation’s highest court issued no decision today in the Dobbs case regarding a 15-week abortion ban in Mississippi, which means the next set of Supreme Court decisions from this term will be handed down next Monday. If Roe is reversed, as many as 26 states could protect babies from abortion.

With Justice Samuel Alito authoring a draft opinion overturning Roe that was recently leaked, focus will turn to protecting babies from abortions in as many states as possible. The good news is half the country will legally protect unborn children fairly quickly — with some states starting that protection on day one.

Last month, Politico published a leaked draft opinion which indicated the Supreme Court is set to overturn Roe v. Wade, the 1973 case that allowed virtually unlimited abortion on demand. With one month left in the term, the Supreme Court could release the decision late this month or the first week of July.

Although Americans are in favor of overturning Roe and 14 recent polls show Americans are pro-life on abortion, abortion activists have engaged in violence, vandalism and heated protests in response to a leaked draft opinion from the U.S. Supreme Court that overturns Roe v. Wade.  They hope to somehow persuade one or more Supreme Court justices to change their mind.

Politico reports that the Supreme Court justices are very angry by the threats, harassment and violence from the left in response to the leaked draft as well as the leak itself.

“This is the most serious assault on the court, perhaps from within, that the Supreme Court’s ever experienced,” said one person close to the court’s conservatives, who spoke anonymously because of the sensitive nature of the court deliberations. “It’s an understatement to say they are heavily, heavily burdened by this.”

A second person close to the court said that the liberal justices “are as shocked as anyone” by the revelation. “There are concerns for the integrity of the institution,” this person said. “The views are uniform.”

Chief Justice John Roberts was not counted in the vote in the 5-3 draft that was initially released and is thought to be trying to persuade one member of the conservative majority to abandon the position overturning Roe in favor of upholding Mississippi’s 15-week abortion ban and allowing states more latitude to ban late abortions without overturning Roe entirely.

But, according to Politico, he’s not finding any takers. That likely means he will side with liberals against overturning Roe but upholding the law.

“However, the draft majority opinion wound up being written by Alito, and its strident text signals it is unlikely Roberts will be on board,” it reports.

As all this is happening, Altio and his family have reportedly been moved to a location that will not be revealed. Last week, Alito canceled an appearance at the 5th U.S. Circuit Court of Appeals’ judicial conference. Although no official reason was given for the cancellation, the move came only days after the leak.

Late month, Supreme Court Justice Clarence Thomas had a message for the radical abortion activists who think they can bully the Supreme Court into revising its draft opinion overturning Roe v. Wade: You can’t bully us.

Chief Justice John Roberts spoke at the same conference, where he called the leak “absolutely appalling.” He, too, said the violence and attacks form pro-abortion activists would not influence the Supreme Court’s final decision.

Many states already have taken action to protect unborn babies from abortion in anticipation of the day when Roe will be overturned. The Guttmacher analysis identified 21 states that have laws or constitutional amendments that would ban abortions once the power to do so returns to the states.

Some of these states still have pre-Roe laws that prohibit abortions, and others have trigger laws that immediately will outlaw the killing of unborn babies in abortions once Roe is overturned. Several also have multiple pro-life laws in place including heartbeat laws and other legislation that would limit or ban abortions if the courts allow them to do so.

Additionally, Guttmacher predicts that five more states would move quickly to protect unborn babies from abortion if Roe is overturned. Florida, Indiana, Montana, Nebraska and Wyoming have passed a number of pro-life laws in recent years, and they likely would take action “as soon as possible” to protect unborn babies by passing abortion bans, according to the analysis.

Altogether, these actions would result in hundreds of thousands of unborn babies being spared from abortion every year. Recently, a group of 154 economists and researchers estimated that abortion numbers would drop by about 120,000 in the first year and potentially even more in subsequent years if the high court overturns Roe and allows states to ban abortions again.

Other analyses have predicted anywhere from eight to 31 states would end abortions if the Supreme Court overturns Roe v. Wade. In 2018, the pro-abortion group NARAL predicted 13 states would immediately ban abortions. A previous estimate by the Center for Reproductive Rights put the number at 31 states.

Currently, states are forced to legalize abortions for any reason up to viability under Roe and Planned Parenthood v. Casey. Because of these cases, the U.S. is one of only seven countries in the world that allows elective abortions up to birth. Since 1973, about 63 million unborn babies and hundreds, perhaps thousands, of mothers have died in supposedly “safe,” legal abortions.