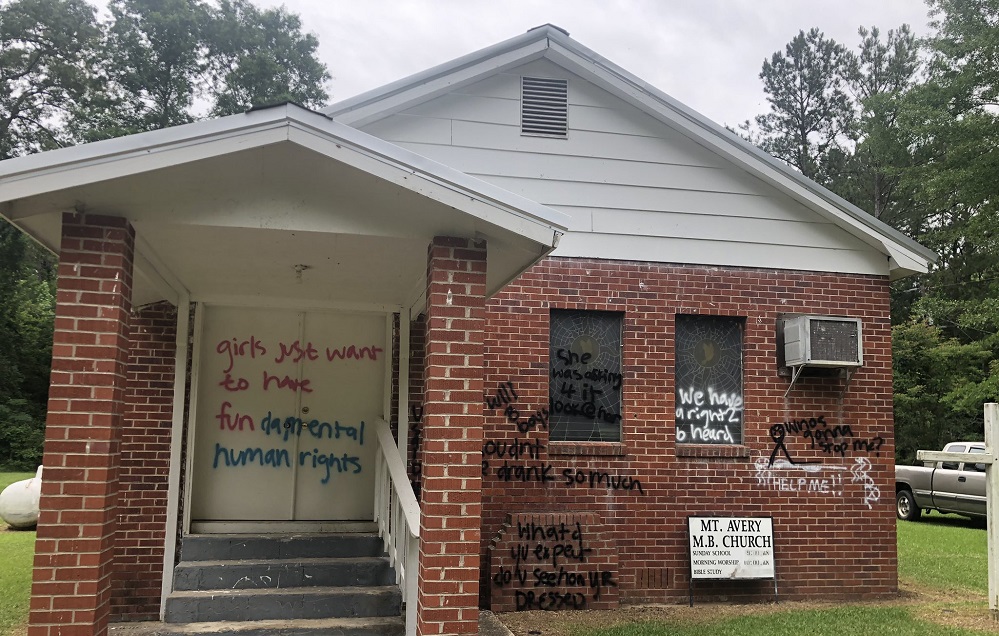 A rural Mississippi church was vandalized with pro-abortion graffiti Monday, the latest in dozens of attacks against churches and pro-life organizations in recent weeks.

The walls, doors and windows of Mt. Avery Missionary Baptist Church in Columbus, near the Alabama border, were found covered with pro-abortion slogans and what appears to be a drawing of a sexual assault, WCBI News reports.

St. Elmore Armistad, a deacon at the church, said someone noticed the graffiti Monday afternoon and called him, according to the Associated Press.

“Why us? That’s the first thing I wondered,” Armistad said. “You hear about things like that happening other places, but you don’t get a grip on it until it happens to you.”

Photos taken by the local news show phrases like “Keep your laws off my body,” “Girls just want to have fundamental human rights” and comments about sexual assault painted all over the building.

The Lowndes County Sheriff’s Dept. is investigating the vandalism of Mt. Avery M.B. Church. The vandalism was discovered Monday morning. Messages include “girls just want to have fundamental human rights” and “Keep your laws off my body.” pic.twitter.com/yblmMfBpbY

Armistad said the congregation is poor, older and African American, and just a handful of people attend every week.

“Everybody is on disability that’s here,” he told the local news. “Except for some young ones that attend sometimes. You know how young people don’t attend church anymore.”

Lowndes County Sheriff Eddie Hawkins is investigating, but the church is located in such a rural area off a small country road that he said it will be difficult to find witnesses, according to the reports.

Hawkins and Armistad said they suspect the vandals chose to target the church because they would not get caught. Armistad said he does not know what other reason there could be, because the congregation is not political.

“We don’t preach abortion,” he said. “We preach Jesus Christ. It just don’t add up.”

Four other churches also were vandalized with pro-abortion graffiti this week in Washington state, and dozens of attacks on pro-life and Christian groups have occurred since news broke earlier this month about a leaked draft U.S. Supreme Court ruling that shows the justices overturning Roe v. Wade through the Mississippi case Dobbs v. Jackson Women’s Health.

Even prominent pro-abortion groups are using words that hint at possible insurrection and violence. Earlier this month, Rachel O’Leary Carmona, executive director of Women’s March, warned that abortion activists will be “ungovernable” until the government legalizes abortion on demand.

The Supreme Court has not issued a final ruling on the abortion case yet, but the Department of Homeland Security released a report last week warning that radical abortion activists plan to burn down or storm the Supreme Court building and murder justices and their law clerks if the court overturns Roe v. Wade. The report indicates these pro-abortion extremists also plan to target churches and other places of worship with violence and vandalism.