This afternoon pro-abortion Democrats in the U.S. Senate failed to advance the so-called “Women’s Health Protection Act,” radical legislation that would expand abortion until the moment of birth by preventing enforcement of existing laws that protect unborn children at the state and federal level and block the passage of new pro-life laws. The legislation, which is backed by the Biden administration, is unpopular among voters in battleground states.

In response, the national pro-life group Susan B. Anthony List (SBA List) announced the launch of a TV ad buy in the Washington, D.C. area media market, as a part of an ongoing $10 million education campaign surrounding the Dobbs case. The ad buy will begin tomorrow and run for two weeks on cable news. 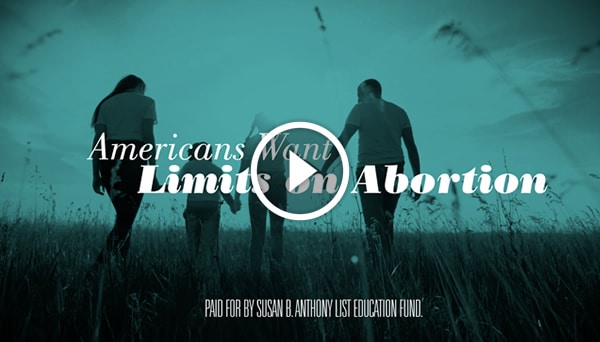 An excerpt from the script of the ad follows:

“…some leaders in Washington don’t want a debate.

They want abortion on-demand, through birth, in all fifty states. Without any limits.

Americans want their voices heard, and they want limits on abortion.”

“Pro-abortion Democrats are dramatically out of touch with the American people, who overwhelmingly reject abortion on demand until birth. The deeply unpopular Abortion on Demand Until Birth Act would wipe away nearly all common ground pro-life protections in the states, including limits on painful late-term abortion which the people strongly support. It was doomed to fail, and it did.

“At just 15 weeks, an unborn child can feel pain, and the United States is one of very few countries – including China and North Korea – that don’t protect vulnerable children and their mothers at this point.  Radical pro-abortion lawmakers who shamefully advocate a ‘right’ to abortion at any time for any reason will see the consequences of their extremism at the ballot box this fall.”

SBA List previously announced it will score against the bill and sent a memo to Capitol Hill detailing the bill’s extreme provisions.

New polling of likely voters conducted by OnMessage Inc. finds that a strong majority of Americans in key battleground states reject the Democrats’ abortion agenda of abortion on demand until the moment of birth and support a 15-week limit on abortion. The survey of 1,200 likely voters in Arizona, Georgia, Nevada, New Hampshire, Pennsylvania, and Wisconsin was conducted May 2-6, 2022.