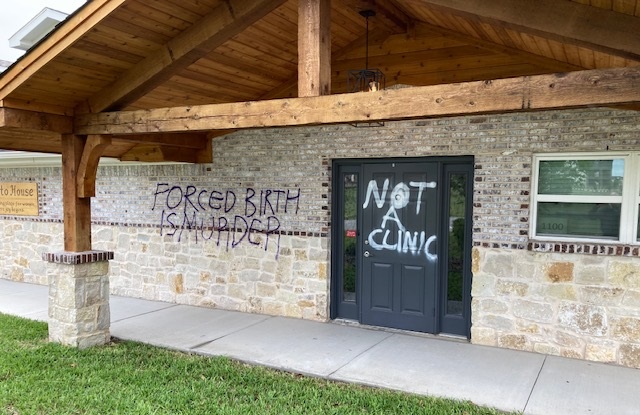 Another pro-life pregnancy center was vandalized over the weekend in Texas as abortion activists protest a leaked draft opinion from the U.S. Supreme Court that overturns Roe v. Wade.

The Loreto House in Denton, Texas, was spray-painted with pro-abortion graffiti including, “forced pregnancy is murder” and “not a clinic,” the Catholic News Agency reports.

Denton Record-Chronicle confirmed the vandalism occurred sometime between Friday night and early Saturday morning, and police have been contacted.

Loreto House in Denton was vandalized this weekend.
The pro-life pregnancy center helps women (and men) from their child’s conception until age 3 with material goods, parent education, and emotional and spiritual support.
About their work with families:https://t.co/gV0QgHEcLi pic.twitter.com/mj2R0nSpIS

Randy Bollig, executive director of the ministry, told the newspaper that whoever committed the vandalism also spray-painted over the three security cameras.

“I am optimistic that I might be able to catch something on one of the other cameras or something before they actually spray painted it,” Bollig said. The non-profit supports families in need by providing free pregnancy and parenting supplies, counseling, education, post-abortion healing programs and more. To donate or learn other ways to help, click here.

Catholic Bishop Michael Olson of the Diocese of Fort Worth encouraged people to pray for healing for the person who committed the crime.

“Please pray for the person who perpetrated this, for their interior healing and moral conversion,” Olson wrote on Twitter.

Several other pro-life organizations and churches also were targets of vandalism and violence over the past week.

CBS News reported at least two police officers were injured when a pro-abortion rally turned violent in Los Angeles. During another protest in Washington, D.C., a Daily Wire reporter witnessed abortion activists shoving, spitting on and screaming obscenities at a small group of pro-life advocates who were counter-protesting.

U.S. Supreme Court Justice Clarence Thomas condemned the bullying at a 11th Circuit judicial conference Friday in Atlanta, Georgia. As a society, “we are becoming addicted to wanting particular outcomes, not living with the outcomes we don’t like,” Thomas said.

“We can’t be an institution that can be bullied into giving you just the outcomes you want. The events from earlier this week are a symptom of that,” Thomas continued, according to reports.

Fox News reports at least two pro-abortion groups have been calling for churches, especially Catholic Churches, to be the target of abortion activists’ outrage. One group also posted the addresses of the Supreme Court justices online to urge people to protest outside their homes.

Abortion activists are trying to intimidate the Supreme Court justices to change their mind and uphold Roe after the leaked draft opinion showed the majority voting to overturn the infamous 1973 ruling. The draft is not final, judges can change their minds, and it is not clear when the high court will issue its final ruling on the abortion case Dobbs v. Jackson Women’s Health, but many believe the court will overturn Roe and allow states to protect unborn babies again.