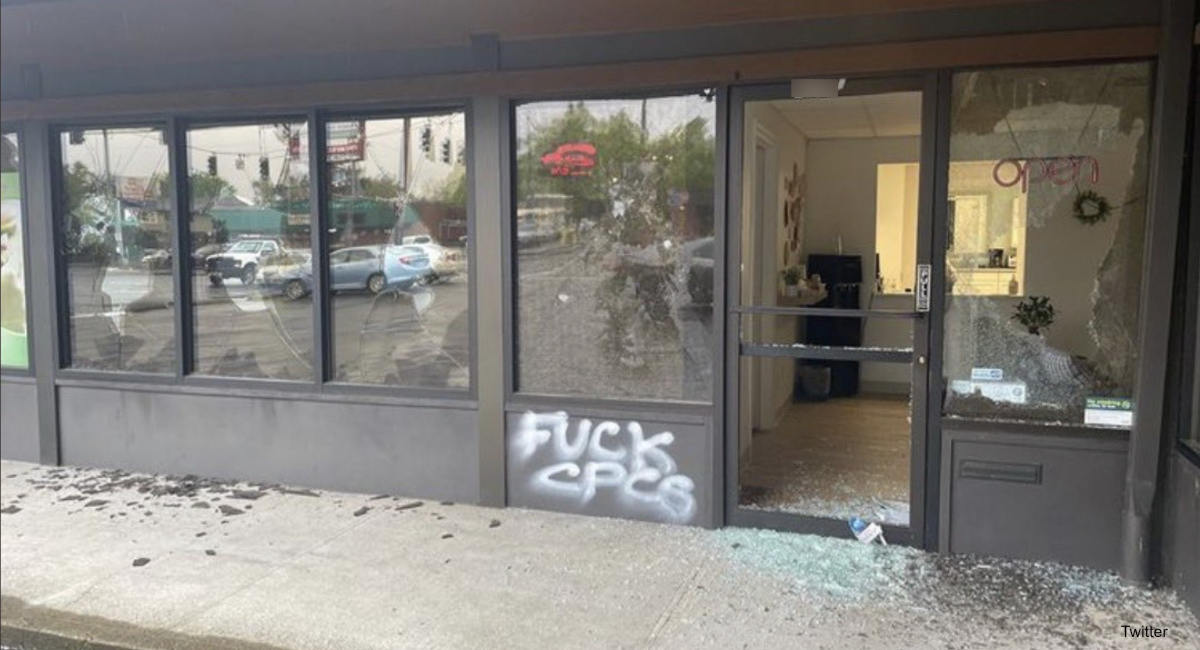 At least two pro-life pregnancy centers were vandalized by abortion activists this week after news broke of a leaked draft opinion from the U.S. Supreme Court that overturns Roe v. Wade.

Live Action News reports the Southeast Portland Pregnancy Resource Center in Portland, Oregon, was vandalized Wednesday, its windows smashed and graffiti spray-painted across the front of the building.

One photo shows broken windows and the words “F— CPCs” scrolled across an exterior wall. The initials CPC stand for crisis pregnancy center.

Luke Cirillo of First Image, the organization that runs the pregnancy center and several others, said they will be closed for a few days to clean up the mess, but they are thankful that no one was hurt.

“We have an incredibly resilient staff,” Cirillo wrote on the ministry’s website. “Nonetheless, it is deeply unsettling and puts everybody at all of our locations a bit on edge. Because of the nature of the crime, it is a federal offense, and we are working with the local police and FBI in whatever way we can.”

To donate to the Southeast Portland Pregnancy Resource Center or learn other ways to help, click here.

A second pregnancy center, CareNet of Frederick in Maryland, also was vandalized with pro-abortion graffiti Tuesday, a spokesperson for the organization told LifeNews. Photos posted on Twitter by an unknown person show graffiti spray-painted all over the front of the building, including, “Not real clinic” and “End forced motherhood.”

To donate to CareNet of Frederick or learn other ways to help, click here.

Sara S. Onge, a pro-life advocate and writer at The Federalist, noted a third possible vandalism at a Texas pregnancy center this week. Writing on Twitter, Onge linked to a series of tweets showing abortion activists protesting outside what they identified as the Trotter House, a pro-life pregnancy center in Texas, and pro-abortion signs hung on the front of the building. However, LifeNews has not been able to confirm details.

“Activists in Tx are currently vandalizing PRCs, & beginning to doxx volunteers/workers who help women facing difficult circumstances,” Onge wrote. “Remember these efforts to remove aid options for women when they complain about ProLife people only caring about babies until they’re born.”

According to Live Action News, some radical abortion activists are advocating openly online for pro-life pregnancy centers to be targeted. The pro-life organization said churches also may be targets of abortion activists’ outrage, pointing to reports of a Catholic church in Boulder, Colorado, that also was vandalized with pro-abortion graffiti this week.

“Yesterday, pro-abortion activists on Twitter put out a hit on pregnancy resource centers in Portland, Oregon,” said Lila Rose, founder and president of Live Action. “This appears to be an act of domestic terrorism. Anti-life activists don’t want pregnant women to have options. They want to scare not only pro-life workers but women seeking alternatives to abortion and support for their babies.”

“We won’t stand down,” Rose said. “Our peaceful, loving movement will continue to help women and families in need, educate them about the violence of abortion, advocate for pro-life laws, and stand for life. Please pray for the safety of all pregnancy resource center workers, volunteers, and patients.”

Other pro-life leaders have told LifeNews about being punched, harassed and followed by radical abortion activists at protests this week, and CBS News reported at least two police officers were injured when a pro-abortion rally turned violent in Los Angeles. During another protest in Washington, D.C., a Daily Wire reporter witnessed abortion activists shoving, spitting on and screaming obscenities at a small group of pro-life advocates who were counter-protesting.

And violence by abortion activists likely will continue as the U.S. Supreme Court gets ready to issue its final ruling on the Mississippi abortion case Dobbs v. Jackson Women’s Health this summer. If the court overturns Roe, the Guttmacher Institute predicts that 26 states would ban abortions.