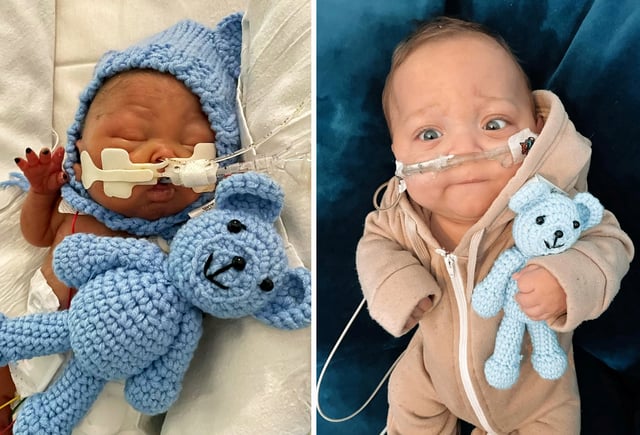 Chay Jefferys’ parents refused to give up hope when their son was born at just 23 weeks of pregnancy in June 2021.

After refusing twice to allow doctors to turn off Chay’s life support, they watched their son slowly and steadily progress until he finally grew well enough to go home, The Epoch Times reports.

“Chay is our little hero,” his mother, Megan Mcgee, said.

Mcgee, of Hillingdon, West London, England, said her pregnancy seemed to be progressing normally in the spring of 2021. Then, she developed a severe tooth infection and her dentist prescribed her antibiotics, according to the report.

“The doctors agree with me that it was probably the antibiotics that triggered my early labor,” she said.

On June 2, 2021, she said she was visiting her mother when she went into preterm labor. A few hours later, she gave birth to Chay at the hospital a full 17 weeks early, the report continues.

“When he was born, he didn’t cry as he wasn’t breathing,” his mother said. “It was horrible not knowing what was going on, but a really lovely nurse took a little video of them working on him, so I had an idea of what was happening.”

Doctors had to resuscitate the tiny infant, who weighed just 1 pound at birth, and then quickly transferred him to another hospital, University College London Hospital in Holborn, to receive more advanced medical care, according to the report.

Chay spent the next nine months in the hospital, fighting to overcome chronic lung disease, kidney failure and brain bleeds, as well as damage to his cerebellum, the report continues. Twice during that time, his mother said the doctors recommended removing him from the ventilator, but she and Chay’s father, Bradley Jefferys, refused.

“I said ‘no’ right away. He had fought so hard. I wasn’t going to give up on him,” the stay-at-home mom said. “They kept suggesting it, but he just kept getting bigger and better and so eventually they stopped asking.”

Now, Chay is home, and his parents said he is thriving.

“He still needs a bit of oxygen, but they think he’ll be off that in a few months, too,” his mother said. “It’s wonderful.”

In November, Guinness World Records recognized an Alabama boy who was born at 21 weeks as the youngest premature baby to survive. Curtis Means was born weighing 14.8 ounces at 21 weeks and one day in July 2020.

In 2017, the journal Pediatrics highlighted the story of another girl who survived after being born at 21 weeks and four days of pregnancy.