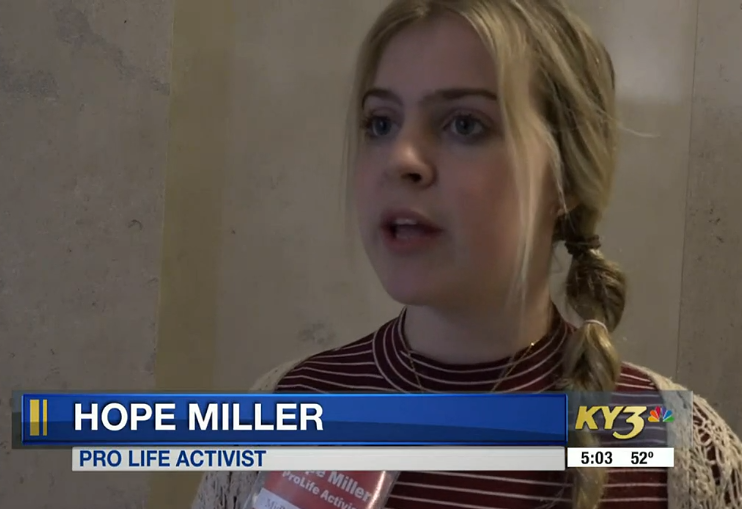 Teen pro-life advocate Hope Miller inspired thousands of Missourians to fight for “the beauty and dignity of all human life” Wednesday during the annual MidWest March for Life in Jefferson City.

Speaking at the Missouri Capitol, Miller said her late grandfather, pro-life leader Joe Scheidler of the Pro-Life Action League, passed on to her his passion for life, according to KFVS 12.

“I hope that people can truly understand the beauty and dignity of all human life. There’s a lot of lack of respect among my generation,” she told the news outlet.

Last year, Miller, who lives in Chicago, said she was supposed to give her first public speech at a pro-life rally with her grandfather, but he died a few days before the event.

“So, that just gave me a new passion,” she said. “So I already had this passion for the unborn, but with his passing had this new passion for making him proud, first and foremost, and for carrying on his legacy.”

Thousands of Missourians shared Miller’s enthusiasm Wednesday at the rally. KMIZ 17 reports the atmosphere was hopeful, despite the rainy weather, as the young woman and others spoke about the likelihood that Roe v. Wade may soon be overturned.

In December, the U.S. Supreme Court heard a major abortion case out of Mississippi that challenges the 1973 abortion ruling. Many hope the justices will overturn the deadly ruling and allow states to protect unborn babies from abortion again.

Missouri is one of about a dozen states that has a trigger law to ban abortions as soon as Roe is overturned.

“So we think it’s best to see [Roe] overturned,” said Bridget VanMeans, CEO of the pro-life organization ThriVe Nation, who spoke at the march. “It looks like it will then go to the states and the states can each decide. And of course, we’re thrilled to be here in Missouri because of course Missouri is a state that affirms men and of course, empowers and equips women.”

The Missouri legislature also is considering several pro-life bills this spring that would protect unborn babies and mothers from abortion. One would defund the billion-dollar Planned Parenthood abortion chain of taxpayer dollars.