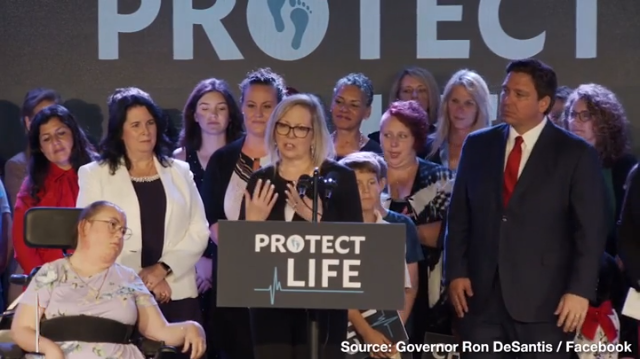 Hope has a scar on her forehead that serves as a reminder of how she was supposed to die in an abortion.

But somehow Hope survived. Though she has cerebral palsy and uses a wheelchair, her mother, Terri Kellogg, said Hope is a fighter, an encourager and a good friend, Breitbart reports.

“When I look at her and I see her scar, I’m reminded of how God spared her life,” Terri said. “I’m reminded that she survived an abortion when there’s 2,363 babies that don’t survive it daily. And her scar, it gives evidence to what’s done in secret.”

On Thursday, Terri and Hope stood with Florida Gov. Ron DeSantis as he signed a 15-week abortion ban into law, legislation that will save thousands of unborn babies from abortion every year.

Terri said Hope’s birth mother had an abortion at 10.5 weeks of pregnancy, but Hope survived.

“She left that day believing that she had the abortion,” Terri continued. “But God had spared her life.”

At nearly six months, Terri said Hope’s birth mother began to feel movement. Realizing she was still pregnant, she chose life and decided to make an adoption plan for her daughter.

Hope was born two months early, weighing a little more than 3 pounds, according to the report. She also had a huge cut across her forehead from the abortion, her mother said.

“And it was jagged and her brain was exposed and there was extra skin pushed down on one side,” Terri continued. “And that’s when it came to light what had happened at the failed abortion from the instrument that was used. And Hope had many complications when she was born that God brought her through.”

“She’s been fighting since the 10.5-week abortion, and to even the first month of her life that she was fighting. She has cerebral palsy as a result, and she still has the scar on her head,” she said.

Three months later, Terri said her family adopted Hope. She praised her daughter as a strong “fighter” and a “blessing.”

“She’s a blessing to everybody that knows her. She’s a friend to all. She describes herself that way, and she’s an encourager. She’s a peacemaker. Her life has great value, and we love her and she loves talking,” Terri said.

She also praised Hope’s birth mother for choosing life when she was given a second chance, and she thanked DeSantis and other pro-life lawmakers for giving other babies a chance at life.

“I’m thankful, my heart is full to be here with all of you that have done so much to stand for life and be a voice for those that don’t have a voice,” Terri said.

The new Florida pro-life law is expected to save up to 5,000 unborn babies from brutal, late-term abortions every year.