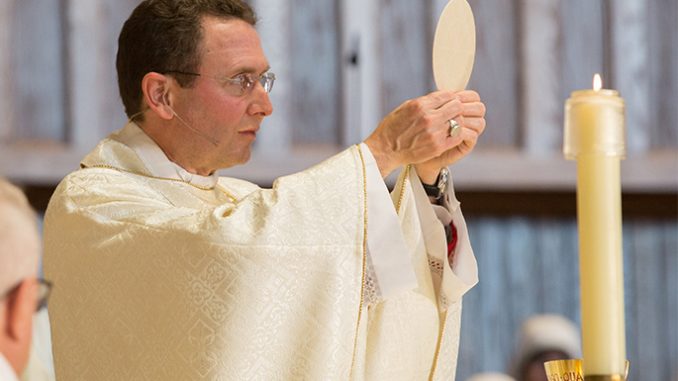 Catholic Bishop Andrew Cozzens was called a “freak” before he was even born.

Speaking with Catholic World Report, Cozzens, the new bishop of Crookston, Minnesota, said a doctor advised his parents to abort him because he would be severely disabled, but they chose life.

“My parents would talk to me about their pro-life convictions by reminding me, ‘The doctor told us to abort you!’” he said. “They’d also say that God spared my life because He had plans for it, so I grew up with a strong sense of vocation.”

Cozzens said his mother was 20 weeks pregnant when her water broke and a doctor told her to have an abortion.

“Her doctor wanted to induce labor and abort me, saying that tests showed I would be a severely deformed child—a ‘freak’ was the word he used,” the bishop told Catholic World Report.

Instead of relying on the doctor’s expertise, he said his parents, devout Catholics, chose to trust in God – and look for a new doctor.

“The second doctor told my mother that if she spent the next 20 weeks in bed there was a good chance I’d come out healthy, and that is what happened,” the bishop continued. “I was born with severe allergies, which I still have, but otherwise I have no health defects.”

Another blessing also came out of the experience, Cozzens continued, saying: “My parents’ insurance didn’t cover the cost of the treatment, but a funny thing happened. My mother’s second doctor made a bet with the first doctor that I would come out healthy. The loser would cover the cost of the medical treatment. So, as it turned out, the first doctor ended up paying the costs related to my birth.”

The bishop said his parents lived out their faith and their pro-life convictions, not only by choosing life for him but also by serving others.

“After I was born, my mother was unable to have more children, so my parents became foster parents,” he said. “… We’d welcome troubled kids,” and his family adopted one of them.

His parents’ witness led him to become involved in pro-life advocacy, too. While attending Benedictine College, Cozzens said he became involved with the pro-life organization Operation Rescue.

He began participating in pro-life rescues, a controversial tactic in the pro-life movement that involved blocking the entrances to abortion facilities to protect unborn babies from being aborted, and Cozzens said he was arrested seven times. That was before the Clinton Administration made trespassing at an abortion facility a federal crime, he said.

Protecting unborn babies from abortions remains important to the bishop today. As the U.S. Supreme Court considers overturning Roe v. Wade this summer, Cozzens told the news outlet that he has been watching the court closely and praying.

“We need to pray and make sacrifices so that the high court will do the right thing,” he said.