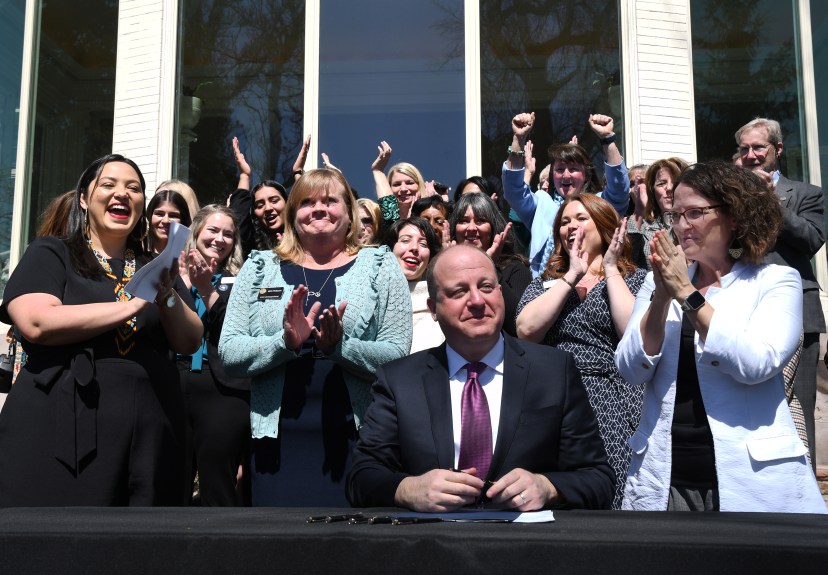 Coloradans expressed outrage this week after seeing Gov. Jared Polis and Democrat leaders celebrate the passage of a new law that expands the killing of unborn babies in abortions and may allow infanticide.

Several people wrote letters to the editor of The Denver Post reacting to a photo that the newspaper published last week on its front page, showing Polis and state lawmakers celebrating the radical pro-abortion law.

“I wondered how many of those people in the picture, including the governor, stopped to think where they would be today if their birth mother had decided to have an abortion?” Bob Lowry of Highlands Ranch wrote.

The new law declares abortion to be a “fundamental right” in Colorado and denies all rights and legal protections to any “fertilized egg, embryo or fetus” up to birth. It also prohibits cities and municipalities from banning abortions through local ordinances such as others have done through the Sanctuary City for the Unborn movement.

According to The Denver Gazette, the law even may allow infanticide because it creates “ambiguity regarding infants killed post-delivery by cause or neglect.”

Polis signed the law last week, despite massive protests against it, and Coloradans continued to express their outrage this week through letters to the editor.

Mary Ann Lueckel, of Broomfield, said it was painful to see so many state leaders “spilling over with joy” about killing more unborn babies in abortions.

“The beginning of precious life is not to be taken for granted — ask the thousands of couples who are unable to experience that joy,” Lueckel wrote to the Post. “The beginning of life is a miracle, no matter how you look at it. That huge picture of those hate-filled smiling faces on your front page is offensive and painful.”

State Democrat leaders crafted the legislation in response to the likelihood that the U.S. Supreme Court will overturn Roe v. Wade later this year and allow states to protect unborn babies from abortion again. They also expressed anger that Texas has been allowed to enforce its heartbeat law, which protects unborn babies from abortions once their heartbeats are detectable and already has saved thousands of lives.

State Republican lawmakers fought against the pro-abortion legislation in record-long debates, but they did not have enough votes to block bill. Democrats control the Colorado legislature by a strong majority, and the bill easily passed both houses in March.