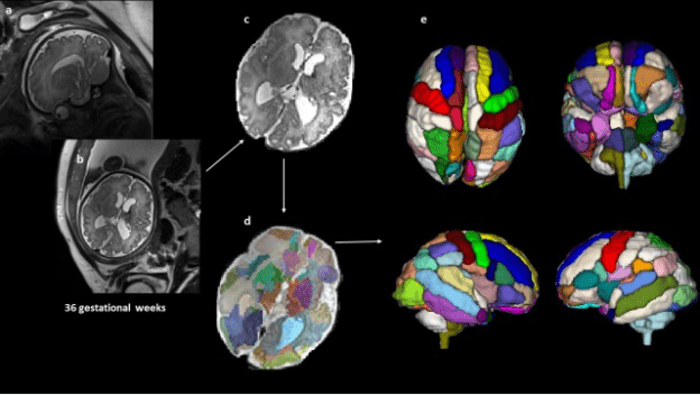 A new study that tested unborn babies for autism demonstrates just how unique and intricately developed babies in the womb are, months before they are born.

Hoping to find an early way to diagnose autism, researchers at Harvard Medical School and the Boston Children’s Hospital scanned unborn babies’ brains at 25 weeks of pregnancy and again after they were born, ZME Science reports.

In a presentation to the American Association for Anatomy this month, the researchers explained their success in using MRI scans to detect potential autism markers before the babies were born.

Their results from scans of unborn babies at around 25 weeks revealed staggering differences in a brain region known as the insular lobe between children who were later diagnosed with ASD and those deemed ‘neurotypical’ (who have a normal brain structure).

The region, which showed up as far larger in autistic children, is thought to play a role in perceptual awareness, social behavior, and decision-making – functions related to social intelligence and awareness.

Dr. Alpen Ortug, one of the researchers, said they believe genetic and environmental factors both may contribute to autism, and earlier detection will help children and their families.

“Earlier detection means better treatment,” Ortug said. “Our results suggest that an increased volume of the insular lobe may be a strong prenatal MRI biomarker that could predict the emergence of ASD later in life.”

Their findings show just how complex unborn babies’ brains are a little more than half way through pregnancy. Other studies have found that babies’ personalities begin to develop before birth, as does their ability to recognize the flavors of the culture’s cuisine.

However, the possibility of a prenatal autism diagnosis also raises concerns about eugenics. Unborn babies diagnosed with Down syndrome, spina bifida, cleft lip and other problems frequently are targeted for abortions.

This discrimination comes from parents as well as the medical community. According to ABC News Australia, a recent study by Down Syndrome Australia found that “half of new parents faced discrimination and neglect from medical professionals during and after prenatal screenings.”

Early detection and treatment of health problems are important advances for modern medicine, but society also must realize that unborn babies are just as valuable and worthy of care as children who are born.