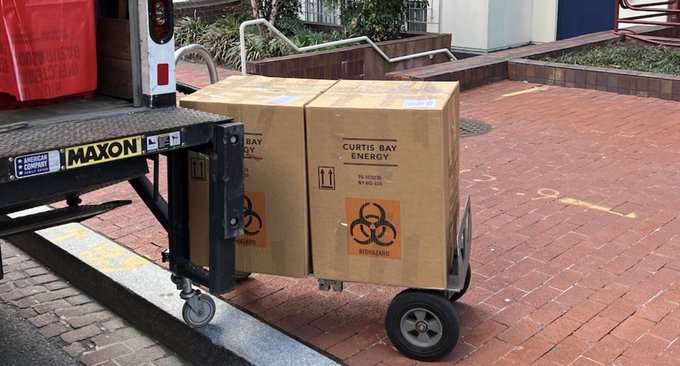 Anti-abortion activists said Tuesday that they obtained 115 aborted babies from a driver for a medical waste company in late March, with the intention of giving the unborn children a dignified funeral and burial.

Five of those babies that appear to be of late-term gestation are now in the possession of Washington, D.C. Metro Police, which retrieved the remains Friday from an apartment in the city where they were being stored by members of Progressive Anti-Abortion Uprising (PAAU), a group that demonstrates against abortion and engages in activism in and around abortion clinics. Police say they are in the early stages of an investigation into how the remains were obtained.

Along with other pro-life groups, PAAU has called on the D.C. Medical Examiner to autopsy the babies’ remains to determine their manner of death in order to assess whether they died after being born, in possible violation of federal laws.

“Pro-life Americans will not stay silent in the face of such aggressive and barbarous violence,” Terrisa Bukovinac, PAAU’s founder, said during a press conference the group held in Washington Tuesday morning. Also speaking at the press conference was Lauren Handy, PAAU’s director of activism.

“We will diligently work until the American abortion-industrial complex is fully disarmed and dismantled,” she said.

Members of the group also demanded that the five babies be allowed to have a proper burial after any autopsies are performed.

The medical examiner’s office has not commented publicly yet on whether it plans to autopsy the babies. On Friday, the Washington Post reported that the medical examiner’s office does not plan to autopsy the bodies, though two anonymous officials told the Post that the decision not to do autopsies “could change if they receive additional information.”

PAAU members on Tuesday claimed that they discovered the babies’ remains in a sealed cardboard box that group members obtained from a driver working for Curtis Bay Medical Waste Services on March 25 during a demonstration outside Washington Surgi-Clinic, an abortion clinic located on F Street in the district’s northwest section.

The clinic is operated by Dr. Cesare Santangelo, an OBGYN and well-known abortionist in Washington. In 2019 the pro-life group Live Action released a video it secretly recorded in which Santangelo says that he would allow a child who survived an abortion attempt to die if the child was born during the procedure. CNA was unable to reach Santangelo for comment prior to publication.

Curtis Bay Medical Waste Services has confirmed that it did pick up three boxes of medical waste from Washington Surgi-Clinic the morning of March 25, but the company denies that any of the boxes left the driver’s possession.

In a statement, Curtis Bay said it has a contract to dispose of biohazardous medical waste from the clinic at a power-generating incinerator the company operates in Baltimore, but the company maintained that “customers like Washington Surgi Clinic are prohibited from disposing of fetuses and human remains via Curtis Bay’s services.”

The group’s members said the 110 smaller babies have been given names, a funeral Mass, and dignified burial in an “undisclosed location.”

In an interview prior to the press conference, Bukovinac and another PAAU activist, Lauren Handy, told CNA that on the morning of March 25, 2022, they were planning to do what they call a “Pink Rose Rescue,” which involves entering abortion clinics with pink roses, offering them to the mothers inside and letting them know there are resources available to help them choose life rather than abortion.

Bukovinac said she and Handy had roses in hand and were planning to enter the Washington Surgi-Clinic. Bukovinac and Handy told CNA they saw a truck parked outside the clinic labeled “Curtis Bay Medical Waste Services,” and a driver about to load two cardboard boxes into the truck.

Bukovinac said she and Handy asked the driver if he knew what was in the boxes, to which he said no. Terrisa told him “dead babies,” to which he looked “totally shocked” and appeared speechless. They asked if the boxes had come from Washington Surgi-Clinic, because the building houses other medical facilities. Bukovinac said the driver responded that he didn’t know, but she said that she and other members of the group saw a label on one of the boxes, which they photographed, indicating that it had come from the clinic.

The two women said they asked the driver if they could take one of the boxes, and when the driver asked what they would do with it, Handy, who identifies as a Catholic, told him that they would give the aborted babies a funeral and proper burial.

Bukovinac and Handy told CNA that the driver, who they say already had “scanned in” the boxes, allowed them to take one of them. They say they did not learn the driver’s name and have not heard from him since.

Curtis Bay Medical Waste Services disputes the group’s account. In a statement, the company said the following: “On March 25, a Curtis Bay employee took custody of three packages from the Washington Surgery Center (Washington Surgi Clinic) and delivered all of them to Curtis Bay’s incineration facility. At no time did the Curtis Bay employee hand over any of these packages to the PAAU or other third party, and any allegations made otherwise are false.”

The statement said that Curtis Bay “continues to fully cooperate with law enforcement.”

Bukovinac was asked Tuesday about the company’s statement.

“When we spoke with the driver, he did say that he had already scanned the boxes in and that was right before he asked, ‘What would you do with them?’” Bukovinac responded.

“So I am not sure if Curtis Bay is lying or if he simply already scanned them in and so therefore they are accounting for them,” she added. “From our observation, there was only two boxes, but it’s possible that he had loaded one onto the truck before we arrived. And it’s definitely possible that they don’t know what is inside the box.”

In the interview with CNA prior to Tuesday’s press conference, Bukovinac said that once she and Handy took possession of the box they immediately took it to Handy’s apartment. They say they did not know for sure what was in the box, so they turned on a video camera and recorded as the box was opened.

Bukovinac described the processing of opening the box and examining its contents as a tearful, “completely soul-crushing experience.” She said the box was full of small turquoise-colored plastic containers, each with a small, first-trimester fetus in it, 110 in total.

There was also an inner plastic bag with five larger plastic containers. In the largest one, the aborted baby, whom the activists named Christopher X, was “whole” and appeared to be large enough to be born alive, in the women’s view.

“We often carry around a fetal model that is 22 weeks … this baby was huge,” Bukovinac recalled.

The women removed a second large baby from the box, a girl whom they named Harriet. The baby’s “brain has been suctioned out and her skull has collapsed and been crushed,” Bukovinac told CNA. Another baby they removed was “severely and brutally dismembered,” she said. Another large baby, whom they named Phoenix, was still within its amniotic sac.

Bukovinac said she and Handy packaged up the babies, called their lawyers, and realized they needed a private pathologist to give an opinion on how the babies had died. They said they were not yet ready to hand the five larger children over to police because they did not believe the police would conduct a thorough investigation.

While looking for a pathologist, the women found a priest willing to come and celebrate a funeral Mass for unbaptized children. They said they named all 115 babies and read the names during the Mass.

The 110 smaller babies were taken to an undisclosed location — not known to Bukovinac and Handy, they said — and buried in a private cemetery. During the press conference they declined to name the priest, or disclose the location of the cemetery, but said they were creating a headstone with all the babies’ names on it.

“It’s our moral imperative, especially as Catholics, to try to uplift the moral dignity of these victims by giving them a proper burial and funeral to commend their spirit to the Lord, commend their soul to the Lord,” Handy said in the interview with CNA.

“And maybe things could have been done differently, I don’t know. I do know that I tried to love to the best of my ability, and I’m thankful for the priests who were advising me the entire time,” she said.

FBI arrived prior to police

Bukovinac and Handy told CNA they were unable to find a pathologist willing to examine the five larger babies’ remains, and they were concerned that there was decomposition occurring. Bukovinac and Handy worked with an attorney to write a letter to the D.C. police homicide division, asking it to investigate the deaths of the larger babies. That letter was sent to the police on March 29, and the women said they expected the police to come that evening, and so left the door unlocked for the police.

The next morning, March 30, they learned that the FBI was making arrests related to a federal indictment of Handy and eight other protestors charged earlier that week for alleged violations of the Freedom of Access to Clinic Entrances Act during a protest at the Washington Surgi-Center in 2020, which one of the protestors streamed live on Facebook.

Bukovinac told CNA she and Handy had returned to the apartment that morning to check if the babies were still there, or if the homicide division had already come. Bukovinac said when they stepped out of their Uber, the FBI stepped out of their cars and arrested Handy on the sidewalk, never entering the property.

When Bukovinac went into the apartment, the babies were still there, she said. She contacted her lawyers, who said she would need to be present to let the medical examiner and homicide division in. She told CNA that she let the police and forensic team in when they arrived, and the authorities opened the containers and took photos of the babies.

City officials have not announced any charges in connection with the revelation of the remains. Executive Assistant Chief of Police Ashan Benedict said at a March 31 press conference that the five babies recovered “were aborted in accordance with D.C. law” and that an investigation into how the remains ended up in the apartment is ongoing.

The district’s abortion laws are some of the least restrictive in the nation. The district does not have a gestational limit until which abortions can take place, meaning they are legal until birth.