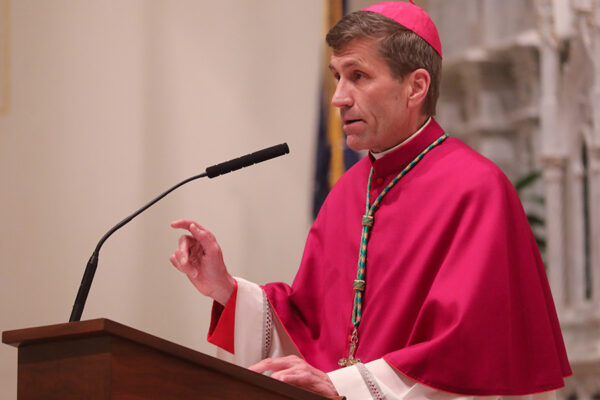 Maryland Catholic bishops gathered to pray for unborn babies Wednesday as state lawmakers passed a bill to expand abortions and use taxpayers’ money to pay for them.

Leading the service at St. Mary’s Church in Annapolis, Baltimore Archbishop William Lori urged Catholics to pray for mothers in crisis and their unborn babies, according to Catholic Review, the newspaper of the Archdiocese of Baltimore. Four other bishops also participated in the service.

“Pray for our elected officials, that they might find the strength and courage to promote the dignity of all human life – including the unborn – just as they seek to do in so many other legislative initiatives designed to protect and promote God’s great gift,” Lori said.

The bill is on its way to Gov. Larry Hogan’s desk, though it is not clear if the governor will sign it. Hogan is a Republican, but he is not pro-life.

ACTION ALERT: Contact Gov. Larry Hogan and urge him to veto the bill.

The Maryland Catholic Conference, Maryland Right to Life and other pro-life organizations have been urging lawmakers to reject the bill and protect unborn babies and mothers.

“One of the few health and safety protections for pregnant women in the Maryland Code is the legal requirement that only a licensed physician may perform abortions,” Maryland Right to Life said. “But the abortion industry is asking the state to authorize them to put profits over pregnant patients and allow practically anyone to ‘perform’ surgical abortions and ‘provide’ dangerous chemical abortion pills.”

The Prayer Vigil for Life and Lawmakers on Wednesday, sponsored by Maryland Catholic Conference, brought Catholics together to pray for an end to abortion and a restored culture of life.

“Abortion is an issue that has divided our state and nation for decades,” Lori said. “The passage of (this) legislation before the Maryland General Assembly will further this deep divide by disrupting the laws already in place that safeguard life and freedom of conscience and prevent even modest laws to protect life from being enacted.”

Archbishop Lori, who serves as chairman of the U.S. bishops’ Committee on Pro-Life Activities, said that instead of seeing the death of an unborn child as the solution to an unexpected pregnancy, “why not invest resources, instead, on the needs of the mother, the emotional, physical, material and spiritual care of her?”

He noted how the church supports and invests in crisis pregnancy centers for that reason, and he said the state could likewise invest in pre- and post-natal care, medical care, education and other help for women facing unplanned pregnancies who might feel helpless and alone and without any other choice.

Lori also encouraged pro-lifers to pray for people who support abortion, saying they should be treated with compassion.

“Pray for them, walk with them, support them and ask God to open their minds and hearts, to see his face in the face of the unborn, just as they do in the faces of the marginalized, the newcomer, the victim of crime, prejudice and hatred,” the archbishop said.

The other bishops who participated in the service were Bishop William E. Koenig, of Wilmington; Auxiliary Bishop Mario E. Dorsonville, of Washington; and Auxiliary Bishops Adam J. Parker and Bruce A. Lewandowski, of Baltimore, according to the report.

Maryland allows abortions for basically any reason up to birth. The state does not require abortion facilities to report their abortion numbers, but Maryland Right to Life estimates nearly 30,000 unborn babies are aborted there every year.

ACTION ALERT: Contact Gov. Larry Hogan and urge him to veto the bill.