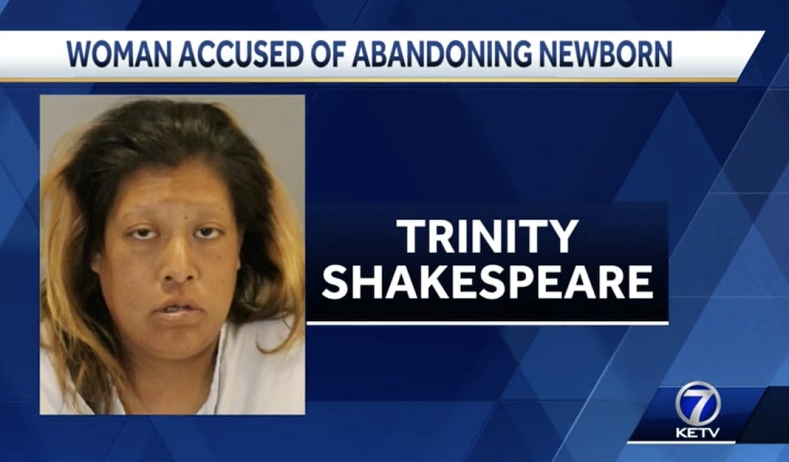 Nebraska police arrested a 27-year-old woman last month after witnesses said she gave birth to a baby boy on the sidewalk in freezing temperatures and then abandoned her child.

Trinity Shakespeare, 27, of Omaha, is charged with felony child abuse in the Feb. 13 incident, according to the Omaha Police Department. Her baby boy survives.

The Western Journal reports witnesses observed Shakespeare in pain along 24th and P streets in Omaha that day and realized she was about to give birth.

“She came up over here,” witness Latrell Crane told KETV-TV. “She was cold. She was in pain. She was crying and I know her.”

Witnesses gathered blankets and helped Shakespeare while Crane called 911, according to the report. After the baby was born, witnesses said Shakespeare stood up, wrapped herself in a blanket and walked away, leaving her baby on the sidewalk. According to the local news, it was 15 degrees that day.

“I come over and then the baby is on the sidewalk,” Crane said. “Like, just in the fetal position, not breathing. Still [his] umbilical cord still attached, know what I’m saying? And then … it’s just my instinct because I have two kids of my own, right? I grabbed the umbilical cord and wrapped it around my hand. And I shook his chest. ‘Come on, baby. Come on, come on, come on.’ And he said, ‘Wah, oh, wah.’”

According to the local news, Crane and others cared for the baby boy until authorities arrived. Police said they found the mother nearby, and medics took her and the baby to the hospital.

Infant abandonment and infanticide are problems across the world. In January, another newborn baby was found alive in a dumpster in Hobbs, New Mexico after the mother allegedly threw the child into the trash several hours earlier.

All 50 states have safe haven laws that allow mothers to safely surrender their newborns to authorities, often at a police station or hospital, without repercussions as long as the infant is unharmed. Typically, laws allow safe surrender in a certain time limit, such as within 30 days of the baby’s birth. Some states also have baby boxes where a woman can safely surrender her newborn baby.

Safe haven laws have saved thousands of babies’ lives. According to the Centers for Disease Control, “Since 1999, when Texas became the first state to implement Safe Haven Laws, an estimated 4,100 infants have been safely surrendered nationwide.”