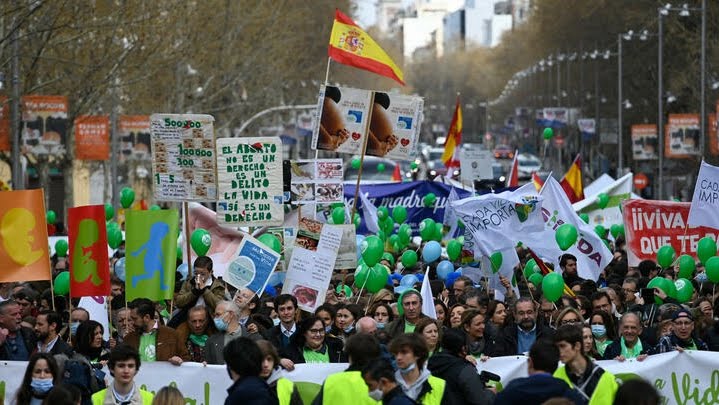 Thousands of pro-life advocates in Spain marched Sunday to urge their government to reject plans to expand abortions and to protect unborn babies’ right to life.

In Spain, it is legal to abort an unborn baby up to 14 weeks, and socialist government leaders recently proposed a bill to expand abortions even more, according to the EMEA Tribune.

The “Yes to Life” march in Madrid over the weekend brought tens of thousands of people to the streets in opposition to the legislation. A video from the news outlet RT showed many young pro-life advocates in the crowd carrying signs that read, “Abortion is not a right. It is a crime. Life is a right,” and “I’m young. I’m pro-life.”

Many in the crowd chanted “More respect for life” as they walked through the capital. Organizers estimated approximately 20,000 people participated, the Tribune reports.

“We cannot conform and get used to this situation of growing aggression against human life that we have been living in Spain for decades,” Alicia Latorre, president of the Spanish Federation of Pro-Life Associations, told Alfa Y Omega.

According to the Tribune, the bill would force all public hospitals to abort unborn babies and restrict pro-life sidewalk counselors from reaching out to women outside abortion facilities. It also would repeal the parental consent requirement for girls 16 and up.

In February, the Spanish Congress of Deputies passed a bill that would punish pro-life sidewalk counselors with jail time just for reaching out to pregnant mothers outside abortion facilities. Abortion activists claim its purpose is to prevent women seeking abortions from being harassed, but pro-life sidewalk counselors are overwhelmingly peaceful.

Spain also legalized euthanasia in 2021, and more than 50 people already have been killed.