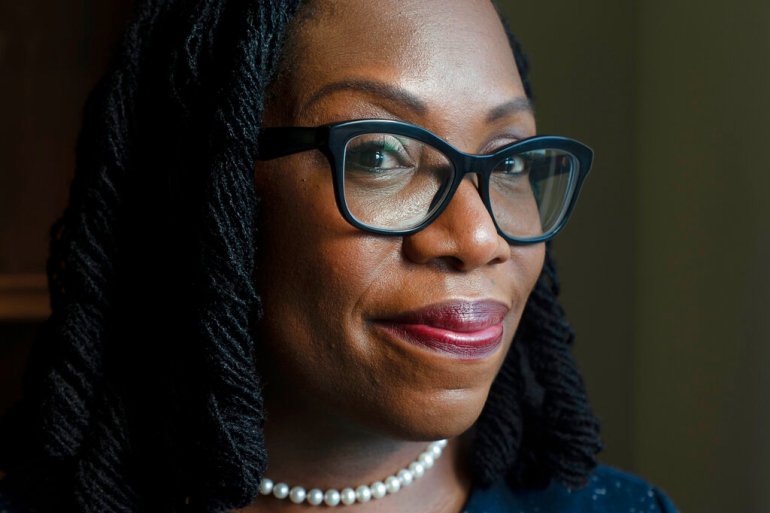 A woman walks up to you on a sidewalk in front of a department store—as you are headed into that store—and says she hopes you will not shop there because it sells products made in Communist China. She then hands you a brochure that lists all of the products sold in the store that are produced in the People’s Republic.

You may or may not agree with her request that you not patronize that store. But does she not have a right, on a public sidewalk, to say what she said and hand you that brochure (which you are also free to decline)?

Suppose your state legislature were to pass a law declaring that people who share her point of view may not approach and speak to people on public sidewalks outside stores that sell products made in China. Would that comply with the First Amendment, which denies government the power to make any law “abridging the freedom of speech”?

President Joe Biden’s nominee to replace Justice Stephen Breyer on the Supreme Court argued in a federal court case that the government can in fact restrict the freedom of speech on a public sidewalk—in the vicinity of an abortion clinic.

In 2001, when U.S. Circuit Court Judge Ketanji Brown Jackson was a private-sector lawyer, she co-authored an amicus brief in the case of McGuire v. Reilly. The case was then before the U.S. Court of Appeals for the 1st Circuit, which is based in Boston.

Among the many “amici curiae” for whom this brief was submitted were Repro Associates, which is described in the brief as “a women’s reproductive health care facility specializing in pregnancy termination,” and Mass. NARAL, which is described as “a statewide organization that works to guarantee every woman the right to make personal decisions regarding the full range of reproductive choices.”

The question in this case was the constitutionality of a Massachusetts law that regulated communications outside what it called “reproductive health care facilities.”

“The Massachusetts Act, however, regulates conduct only within eighteen feet of a ‘reproductive health care facility,’” explained the brief that Jackson co-authored.

“Within that narrow zone,” said her brief, “the Act makes it unlawful to ‘knowingly approach’ within six feet of another person, without that person’s consent, ‘for the purpose of passing a leaflet or handbill to, displaying a sign to, or engaging in oral protest, education of or counseling with such other person … .”

People working for an abortion clinic could approach people outside the clinic.

The year before this Massachusetts law came up in the 1st Circuit, the Supreme Court reviewed a similar Colorado law that prohibited approaching people outside any health care facility—not just “reproductive health care facilities.”

The court voted 6-3 to uphold that law. Justice Antonin Scalia summarized the Colorado law in the dissenting opinion he wrote that was joined by Justice Clarence Thomas.

“Colorado’s statute makes it a criminal act knowingly to approach within 8 feet of another person on the public way or sidewalk area within 100 feet of the entrance door of a health care facility for the purpose of passing a leaflet to, displaying a sign to, or engaging in oral protest, education, or counseling with such person,” Scalia wrote in his dissent in Hill v. Colorado.

“What is before us, after all,” wrote Scalia, “is a speech regulation directed against the opponents of abortion, and it therefore enjoys the benefit of the ‘ad hoc nullification machine’ that the Court has set in motion to push aside whatever doctrines of constitutional law stand in the way of that highly favored practice.”

“Suffice it to say,” Scalia concluded, “that if protecting people from unwelcome communications (the governmental interest the Court posits) is a compelling state interest, the First Amendment is a dead letter.”

In the amicus brief that she co-authored, Jackson argued that it was acceptable for the Massachusetts law to target anti-abortion activists, but not abortion clinic employees.

“It is hard to imagine an audience more ‘presumptively unwilling’ to hear protesting by anti-abortion protesters than women entering a clinic for the purpose of having an abortion,” said her brief. “By contrast, however, those women can be presumed to be amenable to assistance by the clinic escorts, whose role is to help these women accomplish physical entry into the clinic facilities.”

“The fact that the Massachusetts Legislature included an exception in the buffer zone statute to ensure that clinic escorts would be able to continue their integral role in physically ensuring safe access to clinics is hardly evidence of an intent to favor pro-choice speech,” said her brief.

For Jackson, presuming she agreed with the amicus brief that she co-authored, it was a good and constitutional thing for someone to approach a pregnant woman outside an abortion clinic for the purpose of escorting her inside to kill her unborn child. But it was a bad thing—that a state could prohibit by law—for someone to approach that same woman outside that same clinic to try to persuade her to save her child.

LifeNews Note: Terence P. Jeffrey is the editor-in-chief of CNSnews.com.