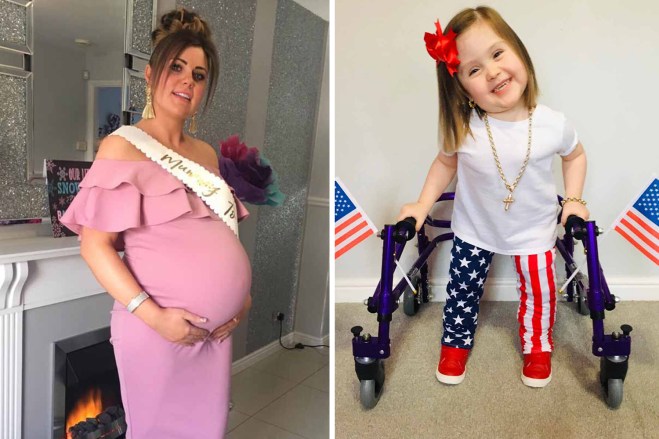 The medical community is putting intense pressure on mothers to abort their unborn babies after a diagnosis of spina bifida, Down syndrome or any other disability.

Natalie Halson, 32, of Manchester, England, had to tell her doctors “no” ten times before they accepted it as her final answer, according to The Sun. Her daughter, Mirabelle, now 3, was diagnosed with a severe form of spina bifida in the womb.

“Doctors warned me that my baby might not have any quality of life, but I knew in my gut that I was doing the right thing,” Halson said.

It was during her 22-week ultrasound scan when she first learned that something was wrong with her daughter. After Mirabelle showed signs of spina bifida, she said the doctor suggested an abortion – “which was just completely horrifying to hear.”

“That wasn’t the only time I was offered an abortion,” Halson told The Sun. “It was recommended to me a further nine times during the remainder of my pregnancy but I refused.”

Doctors told the expecting mother that her daughter would never walk. Halson asked about the possibility of a fetal surgery to repair the hole in Mirabelle’s spine, a procedure that can lessen the severity of the disease, but she learned that it was not an option in her daughter’s case, according to the report.

On Dec. 12, 2018, Halson gave birth to her daughter by cesarean section at Liverpool Women’s Hospital. Immediately, Mirabelle was transported to another hospital, Alder Hey, for surgery, the report continues.

Since then, Halson said her daughter has had three more surgeries. Now, the toddler is defying doctors’ predictions.

“At first, I was worried that she would miss major milestones, but she’s smashed every expectation out of the park,” she said, bringing up how Mirabelle began talking early.

“Sometimes if I’m dressing her and she catches a glimpse of her scars in the mirror, she’ll point them out and say, ‘Ouch, I’m very brave, aren’t I?’ and I will always tell her, ‘Yes, you are, you’re a very brave girl,’” she continued.

Now, Halson is trying to raise money to take Mirabelle to the United States for a special intensive therapy at Johns Hopkins All Children’s Hospital. With it, she said her daughter may learn to walk.

Halson’s struggle to protect her daughter’s life is not atypical. Growing research shows a disturbing level of discrimination against unborn babies with disabilities in modern medicine.

Another British mother Emma Mellor told the BBC that she was pressured to abort her unborn daughter 15 times, including right up to the moment of her baby’s birth.

This pervasive discrimination has many families speaking up about the value of children with disabilities and the need to provide better, life-affirming support after a prenatal diagnosis.