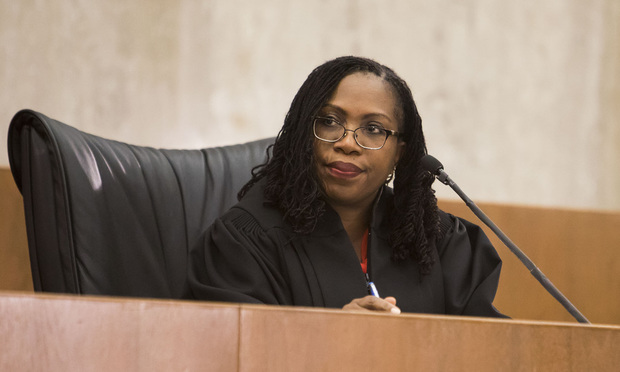 It should surprise no one that Judge Ketanji Brown Jackson, President Joe Biden’s nominee to the U.S. Supreme Court, has a pro-abortion record.

Biden promised that he would appoint a black female justice who supports the so-called “right” to abortion on demand.

And on Friday, he did. The White House announced Jackson as the president’s choice to replace retiring pro-abortion Justice Stephen Breyer, and pro-abortion groups quickly praised her as an excellent candidate.

Jackson once sided with them on a Massachusetts case that involved restricting pro-life advocates’ free speech rights.

According to Christian Headlines, Jackson signed an amicus brief in 2001 supporting a Massachusetts law that created a buffer zone hindering peaceful pro-life sidewalk counselors from reaching out to women outside abortion facilities.

When her [Supreme Court] clerkship ended, Jackson became an associate in the Boston office of a large law firm, Goodwin Procter. In 2001, in McGuire v. Reilly, she was one of the lawyers on a “friend of the court” brief supporting a Massachusetts law that created a floating “buffer zone” around pedestrians and cars approaching abortion clinics. Jackson’s clients included the Women’s Bar Association of Massachusetts, the League of Women Voters, the Abortion Access Project of Massachusetts, and NARAL Pro-Choice America.

Pro-abortion groups spend huge amounts of money lobbying lawmakers to pass buffer zones, which make it harder for pro-lifers to offer the help that so many mothers are desperately seeking for themselves and their babies.

Not only do buffer zones violate pro-life advocates’ freedom of speech, they also hurt mothers and babies. Outside abortion facilities across the world, pro-lifers pray and offer information and resources to help mothers choose life for their babies. Often, they provide information that abortion facilities do not, such as facts about fetal development and pregnancy/parenting resources in the community. Many also pray for those victimized by the abortion industry and offer counseling and other support to post-abortive mothers.

On Friday, Biden described Jackson, currently a judge on the U.S. Court of Appeals for the D.C. Circuit, as an “exceptionally qualified” judge with an “unimpeachable character.”

But those words come from the most pro-abortion president in U.S. history, one who wants to end bans on taxpayer funding for abortions and force states to expand the killing of unborn babies in abortions all across the U.S.

The White House praised Jackson for being “committed to equal justice under the law,” but Biden would not have chosen her unless she shares his opposition to equal justice for unborn babies.

Pro-life and conservative leaders are confident that Jackson will be a progressive judicial activist on the court, if the U.S. Senate confirms her.

“In nominating Ketanji Brown Jackson, President Biden is selecting a judicial activist for the Supreme Court,” said Kelly Shackelford, president of First Liberty Institute. “Her record from the beginning of her career shows hostility to religious liberty, free speech, and other constitutional rights. The American people do not want a liberal extremist on the Supreme Court. If confirmed, Judge Jackson’s judicial activism will place the constitutional rights of all Americans in jeopardy.”

“Ketanji Brown Jackson is backed by many of America’s most radical pro-abortion groups,” Dannenfelser said. “She is on record opposing the free speech rights of pro-life advocates pleading to save lives outside abortion centers and supporting the false claim that abortion is ‘health care.’ We have no doubt she will work with the most pro-abortion administration in history to enshrine abortion on demand nationwide in the law.”

Carol Tobias, president of National Right to Life, said Americans need a justice who will rule fairly and not impose a radical pro-abortion agenda on the nation.

“The American people deserve a Supreme Court justice who will interpret the Constitution according to its actual text and history rather than one who would trample the Constitution to promote the radical pro-abortion agenda of the Democratic party and Biden administration,” Tobias said.