It’s official. Joe Biden has reached another record in his unpopularity. On Wednesday, February 9, 2022, the Democrat’s approval rating dropped into the 30s. Four new polls found him at 41, 40,41 or 38. The Real Clear Politics (RCP) average plummeted to 39.8 (with his disapproval up to 54.4).

By way of comparison, George W. Bush didn’t drop into the 30s until well into his second term, March 2, 2006. How will journalists react to this terrible news?

For these new polls, Ecomoist/YouGov, Rasmussen, Politico/Morning Consult and IBD/TIPP, the network morning and evening newscasts in the last week simply ignored them. The worst numbers came from IBD, finding Biden at just 38 percent. Released two days ago, ABC, CBS and NBC ignored it.

Here’s the RCP average that pushed Biden into the 30s. 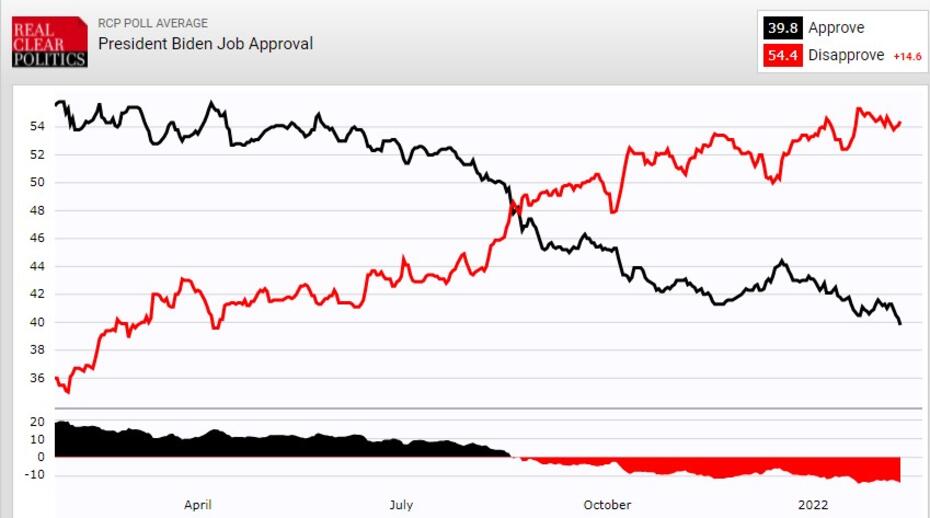 Biden’s polling average of 39.8 is now two full points below Donald Trump four years ago. On February 9, 2018, the Republican averaged an approval of 41.8 and a disapproval of 53.8.

Last week, Biden became officially less popular than Trump, dropping below him in the RCP average from this time in their respective presidencies. Here’s how I recounted the bad polling in January:

On January 12, Quinnipiac, a respected mainstream polling outlet, found the president at a shockingly low 33 percent. But all three networks on January 13 skipped it. It was up to MSNBC, of all places, where host Stephanie Ruhle conceded: “As the White House juggles all of these issues, there was some more troubling numbers out. The latest Quinnipiac poll today puts Joe Biden’s approval at just 33 percent. That is a new low for his presidency.”

With Biden becoming historically unpopular, journalists have a few choices:

1. Honestly report on the bad news for the President and the terrible outlook for the Democratic Party in 2022.

2. Adopt a “Biden? Who’s Biden?” attitude and not cover him.

3. Alert Democrats to the danger as a way of saving the party from total disaster in the midterms.

Given the corruption of the network news media, number one isn’t really an option. Expect a combination of the second and third options.