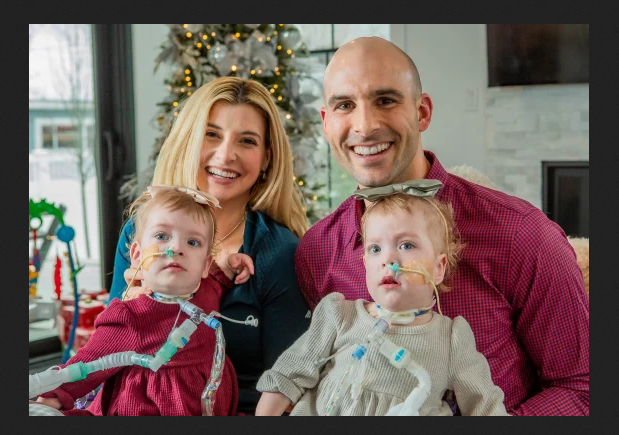 A team of two dozen Philadelphia doctors and nurses spent 10 long hours separating conjoined twins Addy and Lily last fall to give them a better chance at life.

Because their lives were worth it.

Speaking with the Today show this week, their parents, Maggie and Dom Altobelli, of Chicago, said their toddler daughters now are thriving at home thanks to the care and attention they received.

“They smile every single day,” their dad told the news outlet. “That has really made it easier.”

At first, finding out that Lily and Addy were conjoined was “a surprise and it was very shocking,” Maggie Altobelli told Today. “But, we just thought that God gave us these girls for a reason.”

When the couple showed up for their 20-week ultrasound scan, they said they expected to see their baby for the first time and find out if they were having a boy or girl. The Altobellis received their first surprise when they saw two babies on the screen: twins. Then, came the second and more painful shock.

“I was like, ‘Oh my gosh, are there two of them?’ The tech took the wand off and was in a little shock and said she had to go get the doctor,” Maggie Altobelli told Today.

When the doctor came in, she said they were told that their daughters were conjoined.

“It was an out of body experience. It’s like, ‘What do you mean their stomachs are connected? Is this even a thing?” she remembered. “(Doctors) advised us at first, ‘Hey, this is a very long road.’ We said, ‘Well, let’s do all the studies and make sure these girls will live a possibly healthy life.’”

On Nov. 18, 2020, Maggie gave birth to Lily and Addy by cesarean section. Doctors immediately rushed them to the intensive care unit, before their parents even had the chance to hold them, according to the report.

As the girls grew, doctors continued to monitor their condition and prepare them for surgery. Testing revealed that Addy and Lily were connected by their liver and diaphragm, which meant there was a good possibility that they could be separated, according to the report.

In October, when the girls were almost one year old, they underwent a successful separation surgery at the Children’s Hospital of Philadelphia. According to Today, a team of two dozen surgeons and other medical staff worked together for 10 hours to separate the girls.

Lily and Addy spent about a month in the hospital and grew well enough to go home to Chicago on Dec. 1, their parents said. The girls still have feeding tubes and regular therapy, but they are growing stronger every day.

“These girls are going to live long, healthy lives. It’s pretty miraculous and unbelievable that we’re living this life,” their mother said.