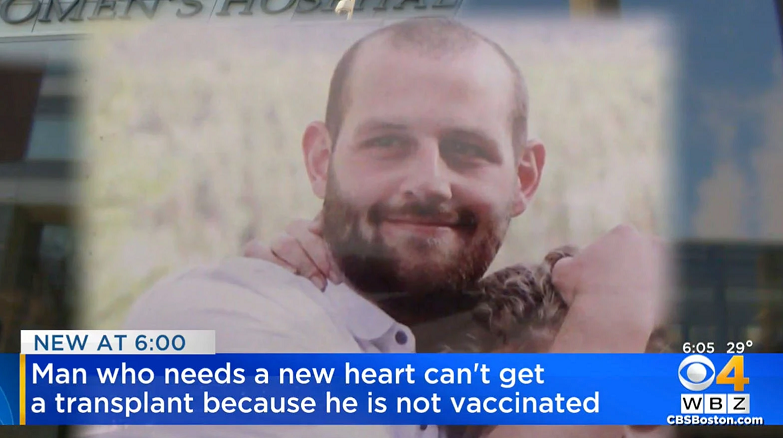 Medical discrimination against unvaccinated patients is continuing, this time in Massachusetts.

A dying patient’s family is speaking out for his plight after a Boston hospital removed him from its heart transplant list because he is unvaccinated against COVID.

David Ferguson says his 31-year-old son DJ Ferguson’s heart has deteriorated to the point that it will no longer work on its own. DJ was first in line to receive a new heart transplant, but because of his unvaccinated status, the hospital ruled that he was no longer eligible for the transplant.

“My son has gone to the edge of death to stick to his guns and he’s been pushed to the limit,” Ferguson told the outlet, adding that his son simply won’t get the shot. “It’s kind of against his basic principles, he doesn’t believe in it. It’s a policy they are enforcing and so because he won’t get the shot, they took him off the list of a heart transplant.”

In a statement, Brigham and Women’s Hospital confirmed its decision to remove Ferguson from the list, saying, “Like many other transplant programs in the United States — the COVID-19 vaccine is one of several vaccines and lifestyle behaviors required for transplant candidates in the Mass General Brigham system in order to create both the best chance for a successful operation and also the patient’s survival after transplantation.”

The family is now reportedly considering every option to save their loved one’s life, including seeking transfer to a different hospital facility that doesn’t have a vaccine requirement in place. But a transfer could be dangerous since DJ may already be too weak to move.

“We are aggressively pursuing all options, but we are running out of time,” David Ferguson said.

DJ Ferguson is a father of two children with a third on the way. His family said that while they are pleased with the great care he has received from staff at Brigham and Women’s, they just don’t agree with the hospital’s vaccination policy.

“I think my boy is fighting pretty damn courageously and he has integrity and principles he really believes in and that makes me respect him all the more,” the father said defiantly, adding, “It’s his body, it’s his choice.”

Discrimination against unvaccinated patients is happening around the world.

Australia has announced it will deny transplants to unvaccinated patients, which could potentially put millions of Colorado residents’ lives at risk if the need a transplant to save their lives. The state of Queensland has indicated it will deny life-saving organ transplants to patients who have not received the COVID vaccine.

UCHealth, a Colorado-based hospital system affiliated with the liberal University of Colorado, has made the decision to deny organ transplants to unvaccinated patients in “almost all situations.”

And for one Colorado resident, her decision to not get the COVID vaccine has resulted in her getting rejected for a kidney transplant.

A local state representative has highlighted how the decision is already have disastrous effects for patients. The Blaze has more:

The rules made headlines on Tuesday after Rep. Tim Geitner (R-Colo.) announced that the health system denied a kidney transplant to an area woman because she did not receive the COVID-19 vaccine.

In a statement, Geitner called the practice “disgusting.”

He shared a letter that he said the unnamed patient reportedly received last week from the University of Colorado’s Anschutz Medical Campus in Aurora.

In its letter, the health system said:

The politics surrounding COVID and the vaccines has apparently reached such an absurd point in the Rocky Mountain state that now vaccination status could determine whether you live or die. That’s the opposite of health care and is essentially the denial of lifesaving medical treatment that abrogates the right to life.