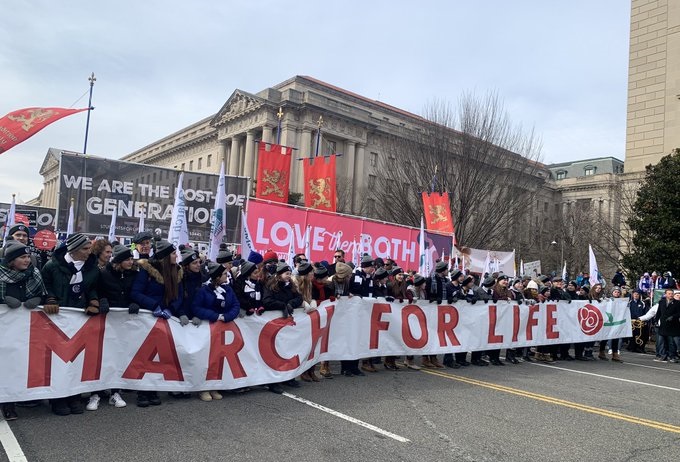 As many as 100,000 or more pro-life Americans marched in the bitter cold Friday in Washington, D.C., hoping and praying that states soon will be allowed to protect unborn babies again.

The 2022 March for Life had a strong spirit of hope as the U.S. Supreme Court considers overturning Roe v. Wade through a Mississippi case that it heard in December.

“Roe is not settled law,” March for Life president Jeanne Mancini reminded the crowd during the rally that preceded the march.

Mancini and others urged the court to recognize that one of America’s most fundamental values, equality, must be applied to all human beings, including babies in the womb.

AMAZING! Thousands upon thousands of pro-life people are flooding the streets to March for Life! h/t @kathrynlopez pic.twitter.com/HVy5n9UcWs

For some already marginalized groups, the abortion-on-demand mandate that is Roe made things even worse. Katie Shaw, a disability rights advocate who has Down syndrome, told the pro-life crowd how unborn babies with Down syndrome especially are targeted for abortions.

“There is a waiting list of babies with Down syndrome to be adopted, yet 80 percent of us are aborted. I am broken-hearted to think of all my friends who are not here today because of abortion,” Shaw said. “Equality begins at the moment of conception. I am proud to be here today to march and show the world that people with disabilities need a chance to live their lives outside the womb.”

WOW! Check out this AMAZING time lapse video of thousands of pro-life people at the March for Life.pic.twitter.com/l5ZqhUpWnv

The march brought together pro-life advocates from all sides of politics. Dan Lipinski, a pro-life Democrat and former Illinois congressman, expressed confidence that the Supreme Court will overturn Roe soon.

“Next year will be a new era because Roe will be gone!” Lipinski told marchers. “Being pro-life cannot be a partisan issue. Equal protection for babies in the womb must be a universal goal.”

And it is. A new Marist poll found that 71 percent of Americans want abortions to be illegal or more limits on abortion, including 36 percent of Democrats.

Here is only half of the #MarchForLife rally crowd. 👀 pic.twitter.com/dmr6XSxvOB

Other speakers encouraged pro-lifers to keep fighting the good fight to protect unborn babies and support their mothers, pointing out how their efforts are making a difference.

“We are on the right side of history in the battle. I needed you then, and these babies need you now. We will not stop until abortion is unthinkable,” said Toni McFadden, a post-abortive mother and pro-life advocate with Students for Life.

And Mikaela Kook, a young mother who chose life despite being pressured to abort her unborn child, shared how Mary’s Shelter, a pro-life maternity home in Virginia, helped her and her baby when they needed it most.

“My daughter Amy is my pride and joy and my source of inspiration,” Kook said.

The March for Life is held annually in Washington, D.C. on or near the anniversary of Roe v. Wade. Many hope that next year’s march will be a celebration of the end of the tyrannical ruling.

In December, the Supreme Court heard a direct challenge to Roe from the state of Mississippi. Between the conservative majority on the high court and the justices’ decision not to block a Texas abortion ban last year, many have strong hopes that the court will end Roe and allow states to protect unborn babies from abortion again. A ruling is expected in June.