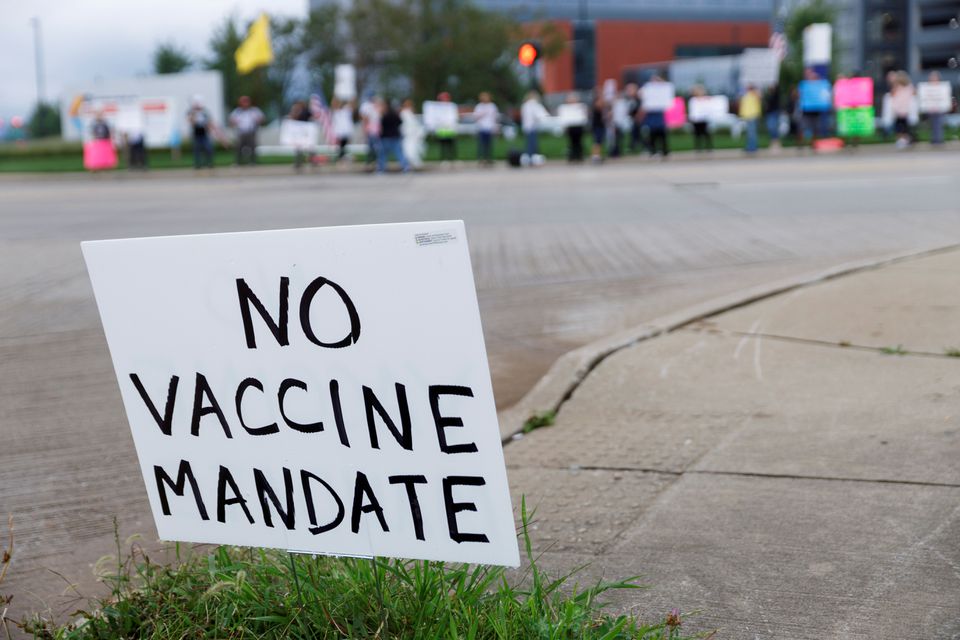 The left wants liberty for pregnant women but tells the rest of us to pound salt.

On Monday, lame duck Mayor Bill de Blasio announced that “Omicron is here, and it looks very transmissible.” So de Blasio, ignoring scientific evidence that COVID-19 vaccines will not stop the variant from spreading, decreed all private-sector workers, in businesses of all sizes, must be vaccinated by Dec. 27.

The mandate also applies to children as young as 5: They’ll need a jab to participate in school activities such as band and sports and to be taken to a restaurant, movie theater or Broadway show.

Kids 5 to 11 just became eligible for COVID shots last month. Not even 20 percent of them have received a dose, the city’s health department reports. Yet de Blasio’s mandate for them goes into effect Dec. 14.

There is no testing alternative, though the city says it will offer exemptions for valid religious or medical reasons, whatever that means.

A mayor who professes to defend bodily autonomy is doing the opposite, forcing everyone to take the shots, regardless of personal qualms. This is the same de Blasio who warned at a recent Brooklyn pro-choice rally that “you cannot have your government attempt to take away your right to control your body. It cannot happen in America.”

Well, it can, as long as you’re something other than a child-bearing female. Across the country, Democratic governors and mayors are imposing vaccine mandates.

At the same time, Democratic politicians, civil-rights groups and their media allies are in a frenzy that the Supreme Court might allow states to restrict abortion. Congressional Democrats are even willing to pack the court to stop it, a scheme most Americans oppose.

New York Times columnist Michelle Goldberg slams abortion restrictions as “an infinitely more invasive form of biopolitical control” than mandatory vaccines. “The View” host Whoopi Goldberg (no relation except their shared hypocrisy on this issue) is OK with compulsory vaccines, but when it comes to limiting access to abortion, she says, “How dare you?”

The pro-choice American Civil Liberties Union sees “no civil liberties problem with requiring COVID-19 vaccines,” calling mandates a “justifiable intrusion” because bodily autonomy “does not include the right to hurt others.”

That would make sense if science showed unvaccinated people are a risk to others. But research indicates that COVID vaccines protect the person getting the shots from severe disease but don’t reliably prevent transmission, according to findings published in Lancet Infectious Diseases.

What little we know about Omicron suggests it’s more contagious than Delta, less likely to be contained by current vaccines and the next dominant strain in the United States. It’s already overtaken Delta in parts of South Africa. But most of the people who have gotten it also show milder symptoms, with the World Health Organization hopeful that Omicron isn’t a major threat.

This week the Supreme Court will vote on hearing a challenge to Maine’s mandate that all health-care workers get vaccinated.

But the 1905 ruling is irrelevant. In 1905, the smallpox vaccine had been in use for over a century, while the COVID vaccines are brand new and evolving. Back then, smallpox killed more than one-third of those infected, while the death rate from COVID is under 1 percent. The smallpox vaccine prevented infection, protecting not just the vaccinated but the community — a powerful argument to make it mandatory. The COVID vaccines are disease tamers, reducing the risk of death or serious illness but not preventing spread.

Centers for Disease Control and Prevention director Rochelle Walensky says she’s unsure vaccines will contain Omicron but hopes “they can prevent severe disease and keep people out of the hospital.” In that case, getting jabbed is your own business and nobody else’s.

Top executives at vaccine-maker Moderna predict their vaccine will not do well against Omicron, and the company is already starting on a new formulation.

Expect that pattern — a new variant followed by new shots — to be repeated. National Institutes of Health head Francis Collins predicts Omicron won’t be the last variant we face.

If Americans capitulate, how many times will they be forced to bare their arms and take whatever an ambitious politician requires? I am pro-vaccine, and I’ve had three jabs. But it has to be voluntary.

LifeNews Note: Betsy McCaughey is chairwoman of the Committee to Reduce Infection Deaths and a former lieutenant governor of New York.