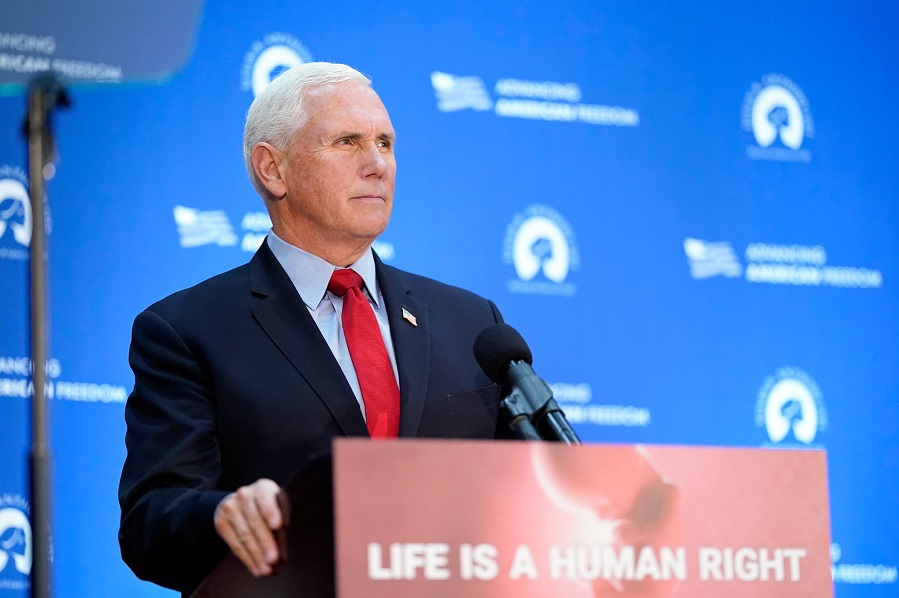 Former Vice President Mike Pence is optimistic that human rights will be restored to unborn babies in America again.

In an interview Saturday with Breitbart News, Pence said he has more hope than ever that the U.S. Supreme Court will overturn Roe v. Wade after listening to its hearing on a major Mississippi abortion case last week.

“I’m very encouraged,” Pence said. “… my hope and my prayer, literally, is that it will persuade our new conservative majority on the Supreme Court to overturn Roe v. Wade and give America a new beginning for life.”

A former congressman and vice president under President Donald Trump, Pence mourned for the 63 million unborn babies who have been legally killed in abortions since 1973.

“It grieves the heart of every American who cherishes the right to life to think that more than 60 million innocent, defenseless unborn babies were aborted …” Pence said. “It’s a number essentially equal to 20 percent of the American population today that is not with us. In a very real sense, what Roe vs. Wade did was it relegated unborn children to a second class pass with no legal protections completely outside the scope of the law.”

After almost 50 years, he said it is long past time for the courts to return the “great moral question” of abortion to the people.

Many hope the Mississippi case Dobbs v. Jackson Women’s Health, which the high court heard Dec. 1, will spur the justices to reverse its disastrous abortion ruling and allow states to protect unborn babies from abortion again.

If Roe goes, abortions would not automatically become illegal across the United States. Instead, the power to protect unborn babies or keep abortion legal would return to the states. Experts predict a dozen to two dozen states would prohibit abortions immediately if allowed to do so. As a result, hundreds of thousands of unborn babies could be saved every year.

Pence told Breitbart that overturning Roe would give the United States a fresh start to protect life.

“I’m hopeful and I’ll say optimistic that this Supreme Court, this renewed conservative majority … appointed by a Republican president and the most pro-life administration in history will give us that new beginning for life,” he said, referring to Trump’s three Supreme Court appointees.

He also praised Justices Clarence Thomas and Samuel Alito as “stalwart” defenders of life. Pence said he wants to hope that Chief Justice John Roberts also will “see the wisdom” of overturning Roe. Though a Republican appointee, Roberts sometimes sides with the liberal justices on abortion and other issues.

While nothing is certain, Pence said he feels encouraged by what legal scholars are saying about the Mississippi case.

“There’s lots of legal theories about what could happen here, but the legal scholars that I respect the most hold the view that … the best, the cleanest, the strongest decision the Supreme Court can make in this moment is simply to overturn Roe v. Wade,” Pence continued.

If Roe goes, Pence said pro-life advocates will need to continue working hard to protect unborn babies at the state and local level.

“I relish the opportunity of taking the case for life to one state legislature after another all across America,” he said. “I’m very encouraged at the opportunity that we have in this case, and we’ll just continue to hope to be a voice but also to pray for a new beginning for life.”

He thanked Americans who have been working persistently for decades to restore protections for unborn babies.

“If our hope and our prayers are fulfilled and Roe versus Wade is overturned, the credit will go to the American people who never gave up on life and by their efforts restored the sanctity of life to the center of American law,” Pence said.

At issue in the Mississippi case is the question of “whether all pre-viability prohibitions on elective abortion are unconstitutional.” The Supreme Court likely will issue a ruling in the summer of 2022.