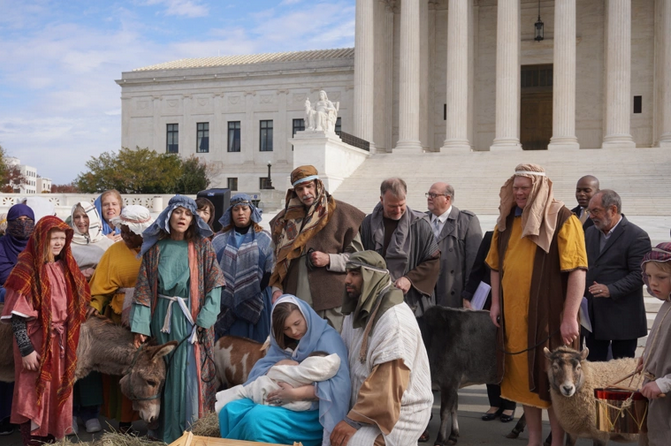 Christians gathered Thursday outside the U.S. Supreme Court building in Washington, D.C. to celebrate the birth of Jesus Christ just a day after the justices heard a major challenge to Roe v. Wade.

The live nativity, a re-enactment of Jesus’s birth in humble circumstances, was a project of the Christian organization Faith & Liberty, The Christian Post reports.

Though Faith & Liberty hosts the live nativity annually around Christmas, the event had special significance this year. On Wednesday, the Supreme Court listened to arguments about whether it was wrong to force states to legalize the killing of unborn babies in abortions through Roe v. Wade.

The 1973 ruling led to about 63 million unborn babies’ deaths, and Christians have been leading the decades-long fight to reverse the ruling and protect unborn babies from abortion.

Allan Parker, president of The Justice Foundation, a pro-life Christian legal group, reflected on abortion as he watched the live nativity Thursday.

“Mary’s unplanned pregnancy led to the salvation of the whole world,” Parker told The Christian Post. “If Mary were alive today, Jesus might have been aborted, and then Jesus and the world would be in darkness instead of having a chance to step into the light.”

Through Jesus’s sacrifice of his innocent blood for humanity, Parker said the world has forgiveness and hope.

“Jesus shed His most innocent blood so that even murderers could be forgiven. We just have to humble ourselves and say: ‘Lord, forgive me,’” he continued.

The ceremonial event consisted of a little over a dozen impersonators dressed as biblical figures like Mary, Joseph, the baby Jesus, the three wise men, angels and more to shed light on the meaning of Christmas and spread the Gospel message. …

At the nativity event, pro-lifers in attendance said it is a “blessing” that Jesus’ “unplanned” birth could be displayed the day after many pro-choice demonstrators openly proclaimed their belief that mothers should have the right to end an unplanned pregnancy.

Judy Mcdonough, a pro-life Christian with Intercessors For America, told the Post that she saw the two events being held so close together as “God’s timing.”

“It’s all about the humanity of the baby in the womb, and every child is so innocent,” Mcdonough said.

In the Christmas story particularly, two unborn babies, Jesus and John the Baptist, are recognized. The biblical passage Luke 1:41-44 states: “When Elizabeth heard Mary’s greeting, the baby leaped in her womb, and Elizabeth was filled with the Holy Spirit. In a loud voice she exclaimed: ‘Blessed are you among women, and blessed is the child you will bear! But why am I so favored, that the mother of my Lord should come to me? As soon as the sound of your greeting reached my ears, the baby in my womb leaped for joy.’”

Christianity teaches that unborn babies are valuable human beings from the moment of conception because they are created in the image of God, and abortion is evil because it sheds innocent human blood.

Nearly 1 million unborn babies are killed in elective, legal abortions annually in the United States. If the Supreme Court overturns Roe, hundreds of thousands of unborn babies could be spared from abortion every year.