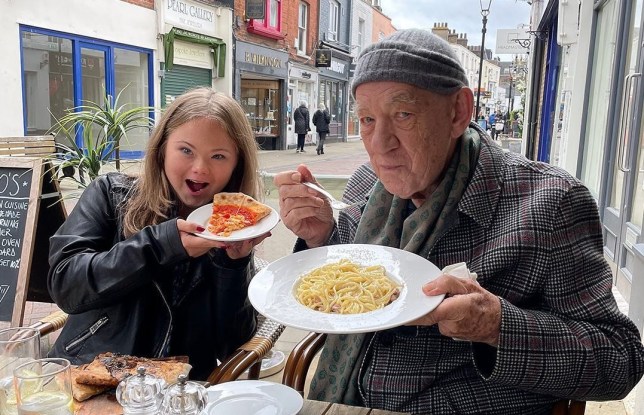 A teen with Down syndrome received the thrill of her life this month when world-renowned actor Sir Ian McKellen surprised her with a special day together.

Millie Anna, a 17-year-old from Windsor, England, hopes to become an actress someday. She and her family are disability rights advocates who frequently share about the abilities of people with Down syndrome on Instagram.

In October, Millie Anna posted a picture of herself attending a theater where McKellen, one of her favorite actors, was performing, according to the Metro. McKellen is a widely-celebrated actor known for many roles in film and on stage, including playing Gandalf in the “Lord of the Rings” series.

Much to her surprise, McKellen noticed Millie Anna’s post and reached out to her.

“What he did was spectacular,” she told the BBC.

He arranged to meet her and her family and, in November, spent 4 ½ hours allowing Millie Anna to show him all around her hometown.

“We had such a fun time, we talked and laughed as we went to all my favourite places. I’m so lucky he chose me to be his tour guide – it was just the best day ever,” Millie Anna said. “I laughed – he made me feel so special! What a day.”

McKellen and Millie Anna shared photos of their special day together on Facebook and Instagram, visiting the local fudge shop, watching the changing of the guard, eating lunch together and looking for someone’s missing cat.

McKellen explained: “I chanced on a photo of the 17 year old Millie Anna outside the Theatre Royal, Martin Shaw and me in the background. It turned out Millie Anna @outwith_millieanna is an aspiring model with the @zebedeetalent agency and outspoken about Down Syndrome. I had a cousin with the same condition.”

He said Millie Anna gave him a “splendid tour” of the town. He also allowed her to introduce herself on his Instagram page and share her dreams of becoming an actress someday.

“One of my goals is to inspire other people with Down Syndrome to follow their dreams, you can do anything you want – sometimes you just need a little extra help to achieve it,” Millie Anna told McKellen’s 2.1 million followers.

“I started my Instagram page @outwith_millieanna to have fun and show I live a normal life, going out, enjoying the theatre, dinners, holidays just like other 17 year olds. One day I’ll be an actor and everyone will see Down Syndrome is really no big deal!” she continued.

Millie Anna also shared the hashtag #dontscreenusout multiple times in her photos with McKellen. The Don’t Screen Us Out campaign works to protect unborn babies with Down syndrome from abortion discrimination.

Millie Anna’s father, Jeffrey, who tagged along on the tour with McKellen, told the BBC that he and his wife want the world to see that their daughter is just as valuable and capable as every other person.

“If everybody knew what Nikki and I know right now no one, no one would ever want to not have like a child like Millie,” he said.