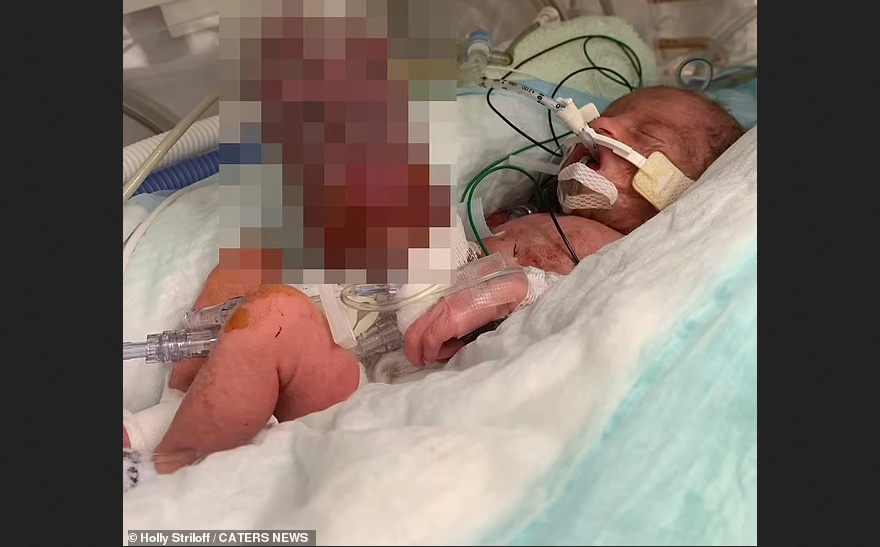 Taking baby Autumn Warner home from the hospital was a dream come true for her parents.

The tiny premature infant spent 110 days in the hospital after she was born with her intestines outside of her body, the Daily Mail reports.

“It was 110 days of sleepless nights, mental exhaustion, trauma, defeat and tears,” said her mother, Holly Striloff. “Yet at the same time, it was 110 days of milestones met, love at first sight, excitement and pure joy.”

Striloff said her daughter now is thriving at their home in Kamloops, Canada.

For months, however, she and Autumn’s father, Travis Warner, were plagued by worry.

According to the report, Autumn was diagnosed with gastroschisis at 18 weeks of pregnancy. Gastroschisis is a birth defect in which the abdominal wall does not close properly leaving a hole where organs can poke through.

“I was shocked because it was not something I had ever really heard of before,” Striloff remembered. “At the time, it was incredibly overwhelming because we were just concerned for her safety.”

Doctors monitored her pregnancy closely, and, on July 5, at 31 weeks of pregnancy, they performed an emergency cesarean section to save Autumn’s life, the report continues. She was born weighing just 2 pounds, 12 ounces.

That same day, doctors began a lengthy procedure to place her intestines back inside her tiny body. According to the report, the procedure involves placing “a bag over the baby’s intestines and hang[ing] them on a bar, which gradually feeds the intestines into the body over a few days.” In Autumn’s case, it took 12 days, her parents said.

Striloff remembered how difficult those first several days felt, not being able to even hold her newborn daughter.

“It’s unnatural to not be able to hug your baby or take her home to be with her family, so a lot of it was just getting over the fact that although she was right by us, we couldn’t do anything with her yet,” she said.

After the procedure, Autumn faced a number of complications, but she overcame each one, according to the report. On Oct. 23, her mother said their dreams came true when they finally were allowed to take Autumn home.

“I had been dreaming of the day for the whole time we were there, and it will now always be a really special day for us,” she said. “She now weighs 8 pounds, 4 ounces and is happy and healthy thanks to the incredible care we received.”

More and more premature babies like Autumn are surviving and thriving thanks to modern medicine.

Earlier this month, Guinness World Records recognized an Alabama boy who was born at 21 weeks gestation as the youngest premature baby to survive. Curtis Means was born weighing 14.8 ounces at 21 weeks and one day in July 2020.