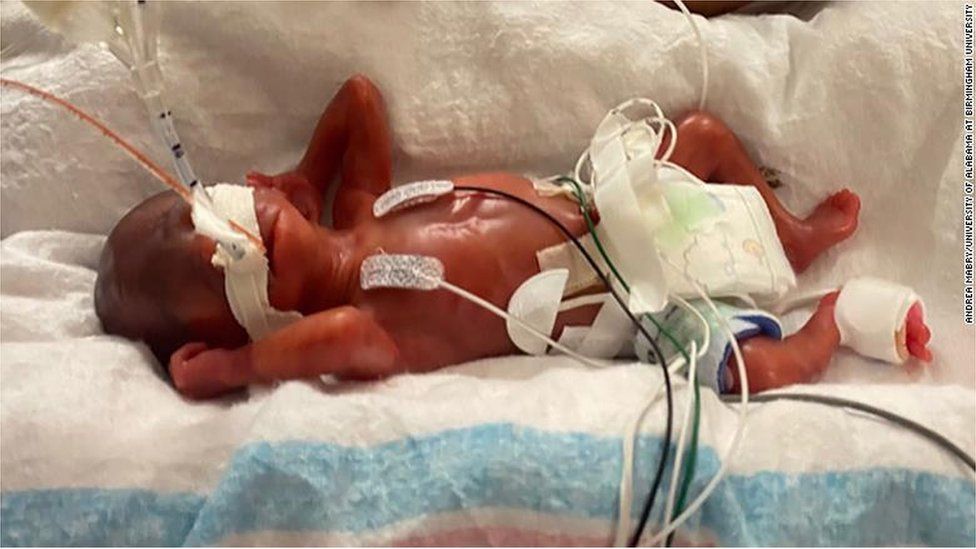 Curtis Means, born about the size of a soccer ball, is now officially the world’s most premature baby ever to survive.

Ironically, Curtis was born exactly one month after the birth of the previous world’s most premature baby, Richard Hutchinson from Wisconsin.

“The numbers say that babies at this age will not survive,” said Dr. Brian Sims, the neonatologist  who oversaw the twins’ delivery and who was greatly involved with Curtis’ subsequent treatment.  But “Mum’s question to me was: ‘Can we give my babies a chance?’”

“They didn’t know if he was going to survive so they just told me to keep on praying,”  Chelly Butler said. Defying the grim prognosis and uplifted in prayer, Curtis “responded extraordinarily well to treatment and, as the days and weeks went on, he grew stronger and stronger.”

It was a long journey—275 days—before a small army at the Regional Neonatal Intensive Care Unit determined that Curtis—or “Poodie,” as his family calls him—was able to go home on April 6, 2021.  His family, which includes  three siblings, celebrated his birth on July 5. Chelly Butler was originally scheduled to deliver on November 11, 2020.

“His discharge from the hospital was only made possible with a tailored course of medication and special equipment such as bottled oxygen and a feeding tube, but it was nevertheless a major milestone on his extraordinary journey,” Millward wrote.

Dr. Colm Travers is Assistant professor within UAB’s Division of Neonatology and co-director of the hospital’s Golden Week Program for extremely preterm infants.  He said

“When he was going home, the feeling we had was of being privileged to have been able to take care of him and his mum. It’s such a privilege taking care of these tiny people.”

“After everything that his mum had been through… and the months of not knowing what was going to happen, I was so happy for her that Curtis got to go home and also that he got the recognition [from Guinness World Records] for what she had done to advocate for him, to give him a chance.”

“I’m very proud of him because where he came from and where he at now, I can tell the difference.”