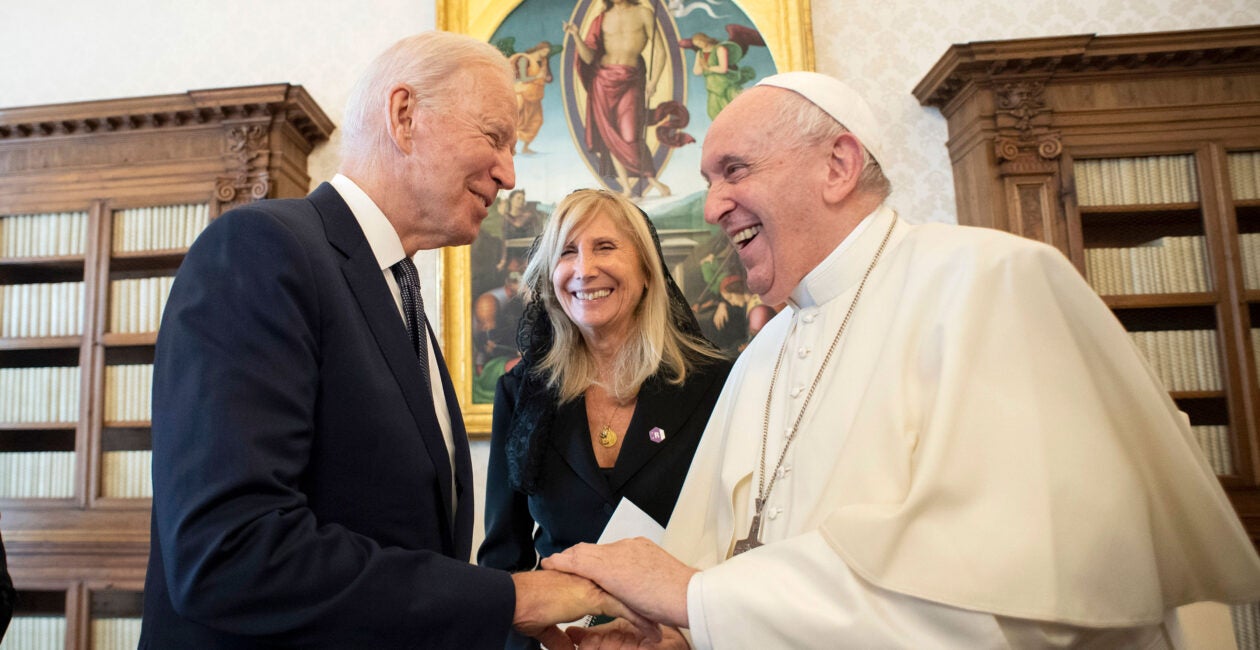 The activities of the Biden administration recently featured two remarkable and profoundly contradictory events. In Rome, President Joe Biden met with Pope Francis. In Washington, his Justice Department filed a brief with the Supreme Court arguing there is a “right” to kill an unborn baby with a beating heart.

What transpired in Washington that day was in reaction to what happened in Texas this spring. On May 19, Texas Gov. Greg Abbott signed Senate Bill 8, the Texas Heartbeat Act. This law declared that “a physician may not knowingly perform or induce an abortion on a pregnant woman if the physician detected a fetal heartbeat for the unborn child … or failed to perform a test to detect a fetal heartbeat.”

This law was not designed to be enforced by the state itself but by lawsuits filed by private citizens. Specifically, it said:

Any person, other than an officer or employee of a state or local government entity in this state, may bring a civil action against any person who: (1) performs or induces an abortion in violation of this subchapter; (2) knowingly engages in conduct that aids or abets the performance or inducement of an abortion …

The law further provided that if a person succeeded in a lawsuit against someone who had performed, induced, aided or abetted the abortion of an unborn child with a beating heart, that person would receive:

Because an unborn child usually begins to have a detectable heartbeat at about six weeks into pregnancy, this Texas law effectively banned aborting unborn babies at that age. Abortion providers sued to stop the Texas law. But that was not good enough for the Biden administration.

After the law took effect in September and the Supreme Court declined to issue an injunction to immediately stop its enforcement, Biden’s Justice Department sued Texas.

“The United States sought both a declaratory judgment that SB 8 is ‘invalid, null, and void,’ and an injunction against the ‘State of Texas—including all of its officers, employees, and agents, including private parties who would bring suit under S.B. 8—prohibiting any and all enforcement of S.B. 8,’” Texas Solicitor General Judd Stone and Texas Attorney General Ken Paxton stated in a brief submitted to the Supreme Court.

“Five days later—though months after SB 8 was passed and weeks after it took effect—the United States sought an emergency temporary restraining order or preliminary injunction,” explained the Texas brief. “It attached declarations from abortion providers who chose to stop performing post-heartbeat abortions because they did not wish to potentially defend themselves in state court.”

The Supreme Court decided on Oct. 22 to expedite the case, set a deadline of Oct. 29 for the final briefs to be submitted, and scheduled oral arguments for Nov. 1. On Oct. 28, the day before the court’s deadline for the final briefs, the Senate confirmed Elizabeth Prelogar as Biden’s solicitor general.

The next day, when Biden met with Pope Francis, his newly confirmed solicitor general submitted her first brief to the Supreme Court. It was about aborting babies who have beating hearts.

“S.B. 8 flouts this Court’s precedents,” Prelogar wrote in the brief she submitted on Oct. 29. “The court has repeatedly reaffirmed a woman’s right ‘to choose to have an abortion before viability and to obtain it without undue interference from the State.’”

“In direct contravention of those precedents, S.B. 8 ‘prohibit(s)’ abortion months before viability,” she told the court. “And the law has had its intended effect: S.B. 8 has eliminated access to abortions after six weeks of pregnancy throughout the State, nullifying a constitutional right.”

In other words, the Biden administration formally argued to the Supreme Court on Oct. 29 that killing an unborn baby with a beating heart is “a constitutional right.” Saint Pope John Paul II stated plainly in his encyclical letter “Evangelium Vitae” that abortion is murder.

“The moral gravity of procured abortion is apparent in all its truth if we recognize that we are dealing with murder,” he wrote. In recent days, as this column has noted, Pope Francis has twice repeated this point. “It’s homicide, whoever has an abortion, kills,” the pope told reporters on Sept. 15. “That is why the Church is so harsh on this issue, because if it accepts this, it is as if it accepts daily murder.” In a Sept. 27 presentation to the Pontifical Academy for Life, the pope stated that abortion “is truly murder.”

Thus, as Biden met with Pope Francis at the Vatican last Friday, his solicitor general was back in Washington filing a brief with the Supreme Court claiming on behalf of Biden’s administration that murdering an unborn baby with a beating heart is a “right” the court must protect.