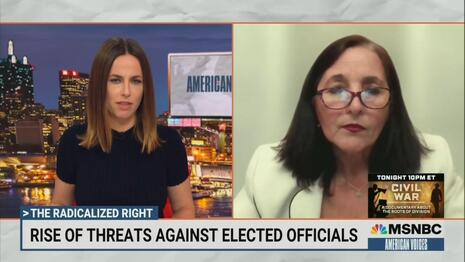 Sunday night MSNBC went all out smearing parents in the Northern Virginia suburbs of Loudoun County as domestic terrorists. On Alicia Menendez’s American Voices, the MSNBC host and her far-left guest cruelly painted parents standing up to school boards, including a father whose daughter was allegedly raped by a transgender student on campus because of the schools’ liberal policies, as radical rioters who were like the January 6 “insurrectionists.”

Menendez set up the smear campaign against concerned parents with a graphic that read, “The Radicalized Right” in big bold letters at the bottom of the screen and “Threats of Violence” in the top corner.

Terry McAuliffe, the Democrat running in the state’s gubernatorial race is facing backlash for saying parents don’t have a say in their child’s education. There has been uprisings from parents across the country, including in Virginia, over Critical Race Theory and transgender bathroom policies. Menendez complained that McAuliffe’s opponent, Glenn Youngkin, was seizing on that. She also repeated the media’s bald-faced lie that CRT ideology isn’t taught in K-12:

This weekend at a campaign rally he promised to ban race theory in schools, even invoking a quote from MLK to make his point. Youngkin is searching for a solution to a problem that does not exist. Critical Race Theory is not part of Virginia’s K-12 school curriculum. This summer Loudoun County, Virginia became ground zero for our nature’s culture war on what is and what isn’t taught in the classroom. Parents showed up at school board meetings in droves speaking out against critical race theory and the policy addressing students by their preferred pronouns. Heated debates like this have turned into real life threats against officials across the country.

She then introduced her guest, Soros-funded Loudoun County prosecutor Buta Biberaj, who sought jail time for a dad who erupted at a Loudoun County Public Schools board meeting in June over his daughter’s alleged rape by a transgender student that the school lied about and covered up. In MSNBC’s twisted logic, the liberal prosecutor was the real victim of this story:

Right wing media is stoking flames, accusing the prosecutor of targeting the father. However WUSA in Washington reports ‘the prosecutor says deputies were unaware he was the father of an alleged school rape victim when they arrested him and our office did not target the father but accepted a referral from prosecution from the sheriff’s office.’ Right wing media has seized on the story, bending the truth, radicalizing the far right. The prosecutor, she is now receiving death threats because of a smear campaign.

Menendez teed up her left-wing guest to defend herself: “How did a referral for prosecution from the Sheriff’s Office turn into this conspiracy?” she asked.

Biberaj pinned blame on the Sheriff’s office. Like MSNBC, she lacked any sympathy for the actual victimized student or her father.

She then actually said with a straight face, “[I]f you have ever seen the video, it really has the hint of the insurrection on January 6th as far as the mob mentality, the heated rhetoric. It just was a very unsafe situation that the officers found themselves in.” Ironically the footage shown by MSNBC didn’t back up Biberaj’s narrative of a supposed violent mob.

The MSNBC host and Biberaj also used the interview as an opportunity to campaign for McAuliffe. After Youngkin called out Biberaj’s knowledge of the rapes the school covered up, Menendez again painted the liberal prosecutor as the victim: “Glenn Youngkin, the Republican running for governor in your state called you out at a campaign rally this week embracing the narrative that led to the threats against you. Your response to him?”

After giving Biberaj the chance to trash Youngkin, Menendez turned to MSNBC regular Clint Watts, a former FBI agent, and Politico’s Betsy Woodruff Swan to hammer home their point that “January 6” was now “local” and liberals should be very afraid. Watts erroneously claimed the backlash against schools was mostly “white and male” despite many parent activists speaking out against school boards being minority women.

Consumer Cellular sponsored this nasty attack against parents and Democrat PR piece for Terry McAuliffe. Contact them at the Conservatives fight back page linked.