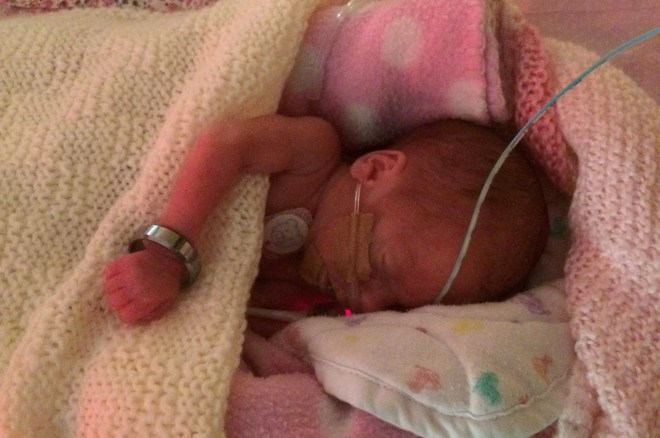 An extremely premature baby was born so small that she could wear her dad’s wedding ring as a bracelet is now six years old and can slip it on her finger.

Poppy Cooke was born at 25 weeks in November 2014, just one week after the legal abortion limit in the UK. She was so frail and born with numerous medical issues that she had to spend the first 107 days of her life in three different hospitals before she could go home with her parents, Matt and Lucy Cooke.

“We couldn’t stroke her in case that broke her skin”.

Mum Lucy, 33, said: “Poppy was so tiny when she was born. Seeing my husband’s ring on her wrist was crazy. It showed just how little she was. Now she can put it on her finger and thumb”.

Back in 2014, Lucy had to be rushed to Worthington Hospital in West Sussex when she was diagnosed with pre-eclampsia. This caused her blood pressure to rise to dangerous levels and it meant that her baby had to be removed. She was only 25 weeks pregnant.

“I was told that my baby would be coming on the weekend”, Lucy said. “I had no idea it would happen so fast – we hadn’t even decided on a name as we’d only just found out the gender”.

Lucy had to be taken to Princess Anne Hospital, Southampton, to give birth because her local hospital was not equipped to look after such a premature baby.

“She’s just incredible and amazes me every day”.

After an emergency caesarean section, Lucy said: “I didn’t get to see Poppy for 10 hours. We didn’t even get to cuddle her until she was 10 days old as her skin was too fragile”.

Poppy was born with a hole in her heart and suffered a cyst on her brain at two weeks old. She then had to have five blood transfusions and suffered from lung disease and numerous setbacks. Despite all this, after over 100 days in hospital, she went home on 7 March 2015, five days after her original due date. Poppy has now turned six and she is thriving.

“It feels out of this world for us that she is doing so well”, Lucy said. Poppy has gone from strength to strength ever since and is reaching milestones just like any other girl her age.

Poppy, now six, said: “I can’t believe that I was so small as a baby and now I am so tall”.

Right To Life UK spokesperson, Catherine Robinson, said: “We are so glad to hear that Poppy is doing so well all these years on, and are once again astounded at the power of modern medicine. This story, and countless like it, shows again and again the archaic and unscientific nature of the current abortion law and one of its main defending arguments – viability outside the womb. It’s about time the law is brought into the 21st century and in line with modern science”.