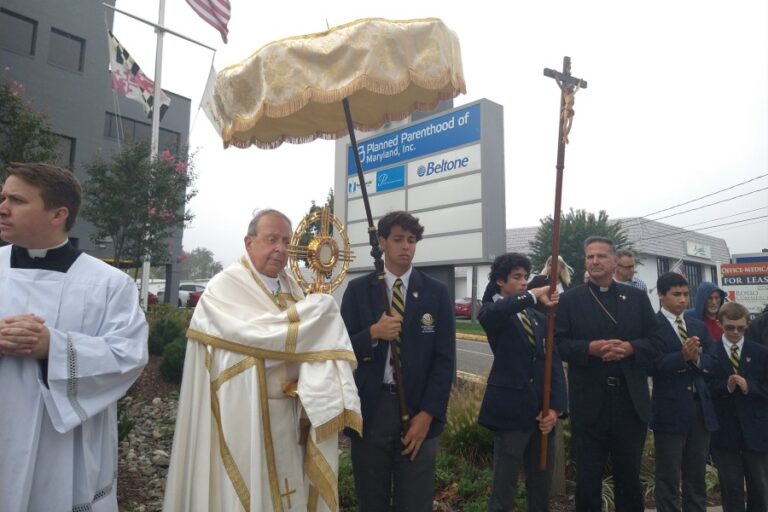 The rain did not deter Catholics from gathering to pray Oct. 12 outside a Planned Parenthood abortion facility in Annapolis, Maryland.

Catholic Review reports Archbishop William Lori of Baltimore led more than 100 Catholics in prayer for mothers and babies as part of the fall 40 Days for Life campaign.

“I’m convinced that whenever we’re in the presence of the Blessed Sacrament, blessings flow,” the archbishop said after the event. “As I stood there in front of the clinic, that was my prayer — that all the goodness and truth and beauty that radiated from the Blessed Sacrament would reach into Planned Parenthood and bring about the conversion of minds and hearts.”

According to the report, Lori lifted a monstrance containing the Blessed Sacrament on the sidewalk outside the abortion facility as they prayed. The crowd included adults and students as well as Auxiliary Bishop Joseph Coffey of the Archdiocese for U.S. Military Services.

During Mass before the procession to Planned Parenthood, Lori spoke about how society has been denying the sanctity of human life for centuries.

“Jesus, God’s eternal son, who became one of us in Mary’s womb, was subject to the same callous disregard for human life that you and I see around us,” he said.

Lori also prayed that the Holy Spirit would provide wisdom and love to help people “be effective witnesses to human dignity.”

Similar prayer services are being held across the world this fall during 40 Days for Life, a peaceful campaign dedicated to daily prayer and outreach outside abortion facilities. Pro-lifers hope their daily witness will awaken the world to the violent injustice of abortion and help bring about restored protections for unborn babies.

The fall campaign runs from Sept. 22 to Oct. 31. Already, participants have witnessed 293 babies being saved from abortion this fall.

Since 40 Days for Life began in 2007, pro-lifers have helped save more than 17,000 babies from abortions, witnessed more than 100 abortion facilities close and helped more than 200 abortion workers quit.

Each campaign is community-based and compassion-focused. The ministry is non-denominational, and Christians in more than 1,000 cities in 63 countries have participated in the past decade. Along with prayer and fasting, participants engage in community outreach by organizing baby showers, diaper drives and other efforts to support families in need.

For more information and a list of locations, visit www.40daysforlife.com.