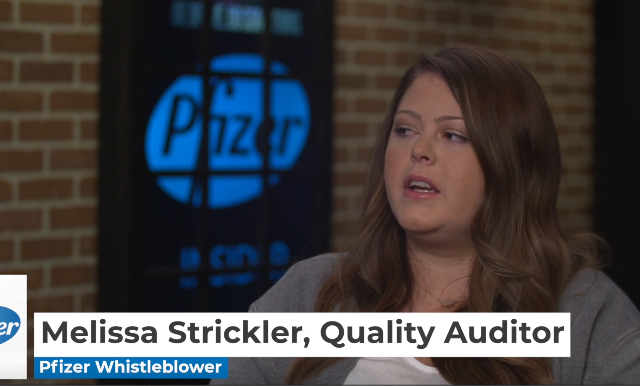 A whistleblower at Pfizer accused the pharmaceutical company of trying to hide the connection between its new COVID-19 vaccine and aborted babies.

“From the perspective of corporate affairs, we want to avoid having the information on fetal cells floating out there,” Vanessa Gelman, senior director of worldwide research at Pfizer, wrote in an email dated Feb. 9, according to the whistleblower.

Gelman continued: “The risk of communicating this right now outweighs any potential benefit we could see, particularly with general members of the public who may take this information and use it in ways we may not want out there. We have not received any questions from policy makers or media on this issue in the last few weeks, so we want to avoid raising this if possible.”

The Pfizer COVID-19 vaccine does not contain actual cells from aborted babies, but it was tested with a fetal cell line, HEK293T. Fetal cell lines are created with cells from an aborted baby that are grown and multiplied in a lab, often for decades, according to the Charlotte Lozier Institute.

Based on the emails, it appears that Pfizer executives understood that many Americans would object to the vaccine if they knew it was tested with a cell line created from an aborted baby.

“These are shocking revelations coming from a Brave Big Pharma Insider. The public has a right to know how the products they consume are developed, especially vaccines,” Project Veritas founder James O’Keefe said.

In one of the emails provided to Project Veritas, dated Feb. 4, Gelman said the company has been trying to avoid mentioning the fetal cell lines “as much as possible.”

Gelman said they “tried really hard” not to share the following information unless it is “strictly necessary and mission critical”: “One or more cell lines with an origin that can be traced back to human fetal tissue has been used in laboratory tests associated with the vaccine program.”

Strickler, a manufacturing quality auditor at Pfizer, told Project Veritas that the statement is part of a larger response crafted by the company to answer questions about the vaccine and abortion.

According to the emails she uncovered, Strickler said the full statement began with: “Human fetal derived cell lines are not used to produce our investigational vaccine, which consists of synthetic and enzymatically produced components.”

She pointed to an email from Gelman to another staffer advising that they “not mention” the second part of the statement about “the fetal cell lines” and “stay focused on the first part if possible.”

Another email provided to Project Veritas from Philip Dormitzer, Pfizer chief scientific officer, confirmed that the vaccine has connections to abortion, but urged employees to the company’s “approved answer” when asked about it.

“HEK293T cells, used for the IVE assay, are ultimately derived from an aborted fetus,” Dormitzer wrote, according to the investigation. “On the other hand, the Vatican doctrinal committee has confirmed that they consider it acceptable for Pro-Life believers to be immunized. Pfizer’s official statement couches the answer well and is what should be provided in response to an outside inquiry.”

Strickler said she contacted Project Veritas because the secretiveness disturbed her.

“They’re being so deceptive in their emails, it’s almost like it is in the final vaccine. It just made me not trust it,” she said.

All of the currently available COVID-19 vaccines have links to abortion, though none contain actual cells from aborted babies.

The Charlotte Lozier Institute has a list of the COVID-19 vaccines with information about whether cell lines created from aborted babies were used in testing and/or production. Find it here.

Opinions about the ethics of the new COVID-19 vaccines vary even among many religious people and pro-life advocates. The Vatican recently issued a statement declaring that it is morally acceptable for Catholics to take vaccines even if they use cell lines create from aborted babies because of the vaccines’ life-saving impact. But other Catholic and pro-life leaders have argued that any connection between the vaccines and the killing of unborn babies in abortions is immoral.