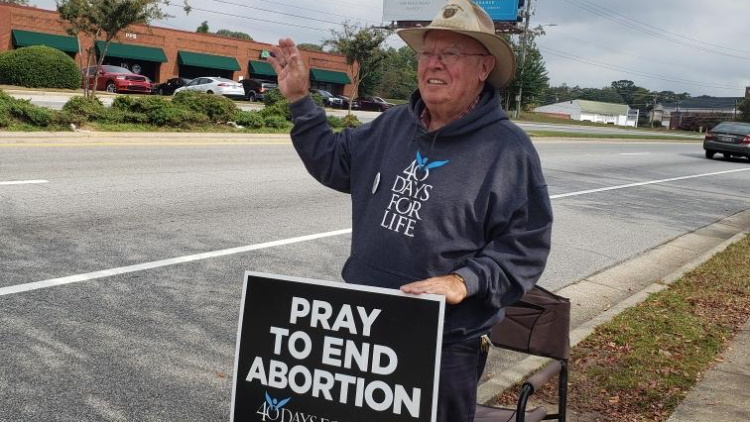 It’s Monday…and that means it’s time to update the number of babies saved from abortion through your prayers.

Today, we know of 135 babies spared from abortion since September 22!

Annie in Overland Park, Kansas noticed a woman outside the abortion facility.

The mom appeared conflicted about going through with her abortion appointment, so Annie beckoned her over.

“I invited her to have breakfast with me,” Annie said. The mother accepted the invitation, and near the end of their meal together, Annie issued another invitation: would the expectant mother like to get a free ultrasound at the local pregnancy resource center?

“I called ahead…and then took her in for a sonogram while I waited in the waiting room,” Annie shared. “I was blessed to see the beautiful sonogram images. Her amazing baby is 14 weeks and 3 days old. She CHOSE LIFE!”

Annie described the mom and baby as “lost sheep, who our Savior searched out and found,” adding that mother and child are “now on His strong shoulders!”

“Please join with me in giving all glory to our Lord and Savior Jesus Christ,” Annie said. “My heart is filled with gratitude for what He has done.”

He thinks his team would have been blessed with #5…but one young, expectant mother was under intense pressure to abort from her own mother.

But just days later, God showed John and his team a fifth saved baby when a woman leaving the abortion facility shouted, “I didn’t do it!”

Mike and Mike in Falls Church decided to cover a full 12-hour day at the vigil themselves.

Their sacrifice paid off as God showed the Mikes a saved baby. “One of the sidewalk counselors gave a woman a pro-life brochure as she entered the abortion center,” said Maureen, the local leader. “She came out 30 minutes later and confirmed that she is choosing life!”

It wasn’t all good news. Near the end of the day, three women left the abortion facility in obvious pain, needing physical assistance to make it to their cars. “The two Mikes prayed for them since we know that their pain is emotional and spiritual as well as physical,” Maureen explained.