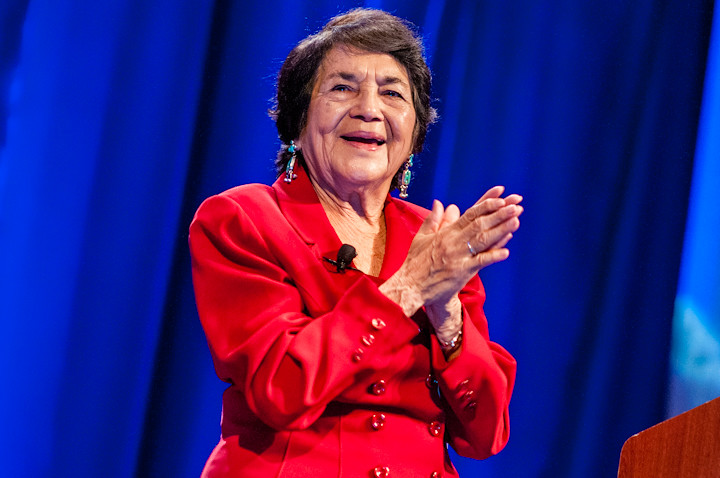 During a recent interview on CNN En Español, labor leader Dolores Huerta argued that the pre-born have no soul, and that pro-life arguments are deceptively used as a political tool with which to engage Latinos.

Watch as Huerta dismisses pro-life beliefs as something to be subordinate to the greater good of organized Latino identity politics:

DOLORES HUERTA: As a Catholic I used to think, as many did, that abortion is a sin. Right, But in reality, given that I’ve had so many children, I know that the child has no soul until they are born. Right? So, before they are born…and that’s something I’ve struggled with greatly… But they use that whole abortion thing as politics, right? And they use this especially as a politics with which to reach the consciousness of we Latinos, so that we don’t understand that this is a politics done by the same people who are opposed to immigration reform, who oppose our stories being told in schools. These are the same people that oppose abortion, right? Abortion, that is a decision for each woman. For each woman and her family, right? This is a very, very private thing and I’ve said before- as Benito Juárez said, “respect for the rights of others is peace.” No politician or priest should tell a woman what to do with her own body. It is the right of each woman to decide what to do with her body, or how many children to have or not to have.

It is fascinating to observe Huerta dehumanize and rehumanize the preborn in the same sentence. Once you recognize the child- not a fetus or clump of cells- then everything else is academic. The theory of preborn soullessness is immediately exposed as a coping mechanism for what follows, which is to call on Latinos to reject traditional long-held values and embrace the modernity of leftist identity politics.

In Huerta’s mind, pro-life beliefs are little more than a tactic to be used by wily conservatives in order to distract gullible Latinos who would otherwise be swayed to support open-borders policies and critical race theory in schools: further proof that the Latino identity is an artificial political construct designed to unite and conquer. In fact, Univision’s Jorge Ramos made a similar argument when he whined about Latinos that had the temerity to vote for Republicans.

Huerta has long held iconic status among the left, and is often elevated, featured, and promoted- especially during Hispanic Heritage Month. Perhaps this explains why CNN En Español thought it appropriate to air her unabridged opinions on abortion, despite their being wildly out of touch with the rest of the community. Choose your icons carefully.

This blatant pro-abortion propaganda was brought to you by Ford. Click here and let them know what you think.