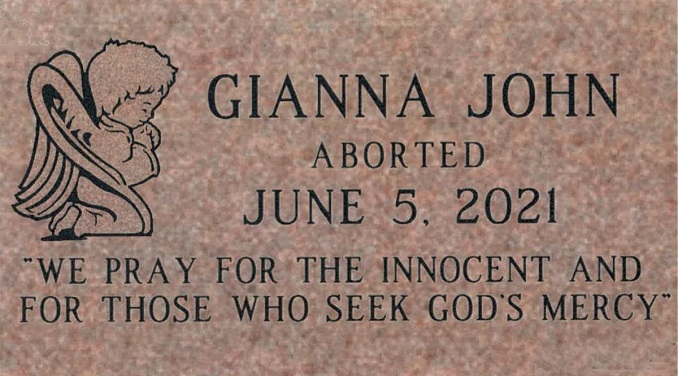 On Saturday, over 150 pro-lifers attended the funeral for Gianna-John, who’s body was discovered in the trash container of the Northeast Ohio Women’s Center abortion clinic, 2021 State Rd. in Cuyahoga Falls, Ohio. The aborted baby, named by local pro-lifers, was laid to rest at Holy

Cross Cemetery in Akron,Ohio during a burial service organized by Northeast Ohio Right to Life. The aborted baby, approximately 15 to 16 weeks gestational age was killed by the Dilation and Evacuation (D & E) abortion method.

On June 4, 2021 a Red Rose Rescue took place at the Northeast Ohio Women’s Clinic (NEOWC) in Cuyahoga Falls, Ohio. Three days later, on June 7th Matthew Connolly, a member of Citizens for a Pro-Life Society who has also participated in Red Rose Rescues, made a decision to search the trash containers of the abortion facility. Carefully looking though each bag he discovered something most profoundly sad and shocking. The aborted baby had been hidden, wrapped up in a blood-stained blue surgical pad used during the abortion procedure.

Ironically, those who participated in the, Friday, June 4th Red Rose Rescue may have actually tried to save this baby from abortion–as well as the faithful sidewalk counselors who were at the clinic the next day, Saturday, June 5th and Monday, June 7th. Also discovered in the abortion clinic trash were several discarded prescription vials and urine cups that contained 33 in-tact names of clinic patients, as well as bio-hazard waste—such as other bloody blue surgical papers and soiled suction cannulas used in the clinic’s abortion procedures. Northeast Ohio Right to Life, with Right to Life of Ohio, have filed complaints with the Ohio Board of Health, the Ohio Environmental Protection Agency and HIPPA violations with the Federal Office of Civil Rights. The Cuyahoga Falls abortion center is currently under investigation.

The NEOWC has had a troubled history. One of its chief abortionists David Burkon’s had his license revoked for six months as he was cited for providing “under the table” dangerous narcotics to patients and friends. In March 2019 it was discovered that the clinic was operating under an expired license. On July 25, 2020 a 29-year-old woman was taken by ambulance from the clinic suffering from “uncontrolled bleeding” due to complications of the abortion procedure.

The Catholic Cemeteries Association donated the burial site and headstone, Heaven’s Gain Ministries donated the casket and vault, and Anthony Funeral Home in Akron donated their services for this unwanted, abandoned aborted baby.

In the Christian religion there are seven corporal works of mercy. The last work of mercy, ‘to bury the dead,” however was the first work of mercy this aborted baby will ever know this side of heaven. Gianna-John is the reality of abortion–murdered in the womb in a horrific act of violence, and then literally tossed into a trash container. Sixty-two million other innocent human beings have shared this same fate–killed with the sanction of law! If the finding of this aborted child calls us to re-double our efforts to bring an end to legalized abortion, then Gianna-John will not have died in vain.